The Feud is a quest in the Desert series. In aiding the trader Ali Morrisane, you encounter a conflict between two gangs in the Desert city Pollnivneach.

Talk to Ali Morrisane in Al Kharid, located just south-west of the Emir's Arena teleport. If you have the quest requirements and follow the correct conversation, he will ask you a favour. He needs you to go and find his nephew, Ali, who lives in a small town south-east of Al Kharid called Pollnivneach.

Buy the Kharidian headpiece and a fake beard from Ali Morrisane for the disguise to be used later if it was not done prior to this point. You can combine the Kharidian headpiece and the fake beard right away to create a desert disguise (which is used later on during the quest) to save inventory space. Optionally, if you do not have the recommended waterskins and desert clothing, you can buy them here.

Go to the little village of Pollnivneach, which is south-east of Shantay Pass. 200 coins will get you there on the magic carpet.

Note: If you see the huge wall, you must go east to enter the village. 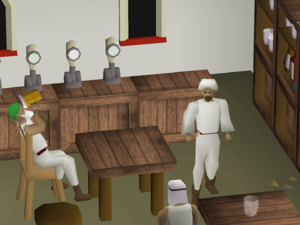 Head to the south-eastern corner of the village, head into the bar, buy 3 beers from Ali the Barman if it wasn't done before, and then talk to Drunken Ali. He will ask for beer in return for information, so, one at a time give him the three beers. You must follow through the dialogue after each beer you give him. He will tell you that Ali Morrisane's nephew's disappearance may be linked to the gangs.

Note: You must use the beers on Drunken Ali to initiate the quest dialogue. Be careful not to drink them or you will have to purchase more.

Head west of the bar to a purple and yellow tent, and talk to any Menaphite Thug (not Ali the Operator). You will ask him if the Bandits giving them back a camel would end the feud.

Now, go and talk to any bandit in the north part of the town. You will also ask them about returning a camel from the Menaphites.

Go to the discount camel store, located at the building north-west of the bar, south of the kebab store; denoted by an Agility training symbol, and talk to Ali the Camel Man. Ask to buy two camels. Offer Ali 500 or 1000 coins (you will actually pay 1000 coins if you offer that and there is no benefit for paying extra, so offering 500 is suggested). You will receive two camel receipts.

Give the certificates for the camels back to both gangs, one to any bandit in the north part of town and the other to any Menaphite in the south part of town, but it doesn't help.

Now, you must join one of the gangs. Go and talk to Ali the Operator. He is located by the purple tent south-west of Pollnivneach and looks like a Menaphite Thug but wielding a scimitar instead. Ask him if you can join his gang. He will want to test you to check if you are trustworthy enough, and he will tell you to go and pickpocket 3 villagers. 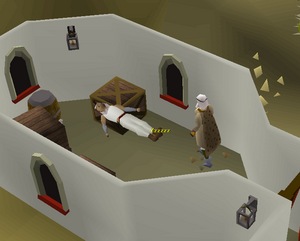 Knocking out one of the villagers.

Now, Ali the Operator wants you to steal the mayor's wife's jewels from the safe in their villa. Ali the Operator will give you a key to the front door. Use the fake beard with the Kharidian headpiece you got from Ali Morrisane, or buy the two pieces from the general store in Pollnivneach, to make a desert disguise. Put on your gloves and your disguise. Click Hide behind on the huge cactus just outside the mayor's villa (north-east of the bar). When the dialogue appears and tells you that it is safe to go in since nobody is home, use your key on the door and go in.

Search the study desk for a note. There is a riddle written on it which grants you the combination to the safe. For a clue to solve the riddle, go upstairs and search the bed for a note which gives the first 5 numbers of the "Fibonacci sequence" - "1, 1, 2, 3, 5...".

Then, search the landscape picture hanging beside the bed (on the 1st floor[UK]2nd floor[US], immediately north of the bed) and you discover the safe. The numbers progress from 1-9 (clockwise), and you must click 1, 1, 2, 3, 5, 8, on the dial. Once the combination is entered, the safe will open and you can take the jewels.

Note: If you do not have at least one inventory space open, you will have to enter this sequence again. 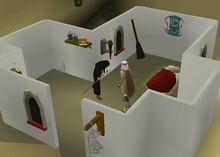 Talking to the Hag.

Give the jewels to Ali the Operator, and he requests you find the traitor. Talk to a Menaphite Thug gang member about it, and he says, "It must be Traitorous Ali." Go back to the Ali the Operator, and you're asked to kill him. Now, go talk to Ali the Barman to find out that the beer on the table belongs to the traitor. Go talk to Ali the Hag up the hill to the west of the town, and she will make a poison for you if you get her a snake. 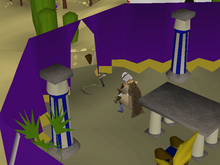 Now, go around the back of the pub, and put some coins in the snake charmer's money pot. He will give you a snake charm and a snake basket. Use (not Play) the snake charm on a desert snake, which can be found north of Ali the Operator's tent.

Note: Even if you have received a snake charm from Ali the Snake Charmer from the quest Ratcatchers, he will give you another (provided they are not in your bank, and you have two free inventory spaces).

Once you've brought the snake back to Ali the Hag, she will tell you the second item she needs is fresh camel dung. Go to Ali the Kebab seller, located just north-west of the well in the centre of town, and ask for his red hot sauce. Take this to the camel shop, and use it on the food trough. Some dung appears – use a bucket on it. You might get green dung, this is not the type you want, and it is totally random which dung you get, so keep trying. You want the nice brown dung or the Ugthanki dung.

Note: The camel automatically eats from the trough after hot sauce is poured into it, dung appears a few seconds after.
Note: You may want to gather three or four more Ugthanki dung, since it is used in My Arm's Big Adventure and possibly needed for Forgettable Tale of a Drunken Dwarf.
Note: If you repeatedly add hot sauce to the trough it will disappear for a short time.

Take the dung to Ali the Hag and she'll give you some poison to kill Traitorous Ali.

Go to the pub, use the poison on the table with the beer, and then go back to Ali the Operator. 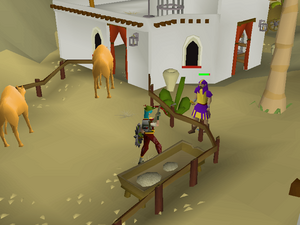 The safespot for the Tough Guy.

Prepare yourself for the fight. Ali the Operator now tells you to talk to the Menaphite Leader (he magically appears outside the tent). You decide to kill the leader as he's just a little crazy with world domination schemes! A level 75 Tough Guy appears to fight you. Swiftly kill him! If you are a low level and it takes too long for you to kill him he will disappear. You can lure him behind the table inside the Menaphite Tent and kill him. (Note for magic users: unlike most quest bosses, the Tough Guy has a high magic defence. If your magic level is low, be prepared for a long fight. It is recommended that you bring the runes for at least 100 spells.) 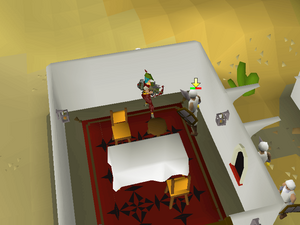 The ideal safespot for the bandit champion.

Talk to the villagers to find out that they are still ungrateful! Note: You must speak to a villager, otherwise the mayor will not appear.

Next, talk to Ali the Mayor. He is a little more grateful about the results of your deeds. You can find him at the well, in the centre of the village. He will tell you of Ali Morrisane's nephew. Now, go back to Ali Morrisane to claim the reward. 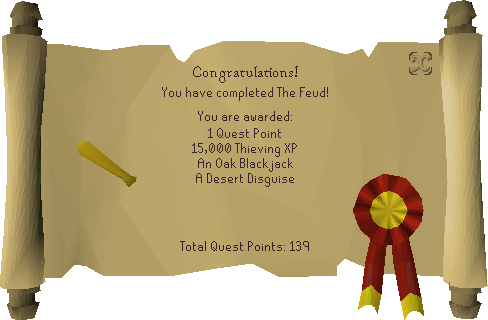 Completion of The Feud is required for the following: