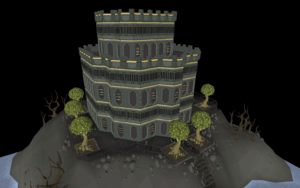 The Forsaken Tower, also known as Dinh's Redoubt, is a building located to the east[?] of Mount Karuulm. It was where Dinh created all of his finest inventions. However, after his death, the tower was defiled by what Undor referred to as "some poncey mage" (who is actually Xeric, according to an ancient letter) and has been off limits ever since. Players visit the Tower during The Forsaken Tower quest.

Outside, the Tower is surrounded by eight magic trees. The ground floor[UK]1st floor[US] houses a display case which contains Dinh's hammer, the only hammer capable of repairing the Doors of Dinh. In The Forsaken Tower quest, the player must complete a series of four puzzles in order to unlock the display case and retrieve the hammer.