From Old School RuneScape Wiki
Jump to navigation Jump to search
This article is about the miniquest. For the scenery object, see Frozen Door.

The Frozen Door is a miniquest involving unsealing the Frozen door within the God Wars Dungeon gaining access to Nex, one of Zaros's most powerful generals.

The miniquest begins when a mysterious messenger gives the player a letter to read, pointing to great treasure in the God Wars Dungeon if they can defeat the generals inside for their key pieces. 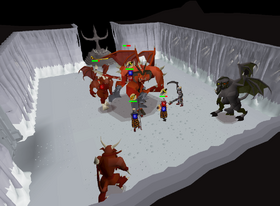 To obtain the pieces of the frozen key, the generals of each faction in the God Wars Dungeon must be defeated.

The player will have to kill the generals of each faction in the God Wars Dungeon. They must deal the most damage to the boss prior to their death in order to obtain the key pieces. If the player cannot deal enough damage (if going in groups), they can obtain the pieces from their bodyguards, albeit at a rate of 1/20. Once all four pieces have been obtained, they can be assembled to create the frozen key.

Strategy guides for each of the four bosses can be found here:

After assembling the frozen key, the player can finally unlock the frozen door and enter. The frozen door is located on the south side of the main chamber in the God Wars Dungeon. Inside, they will be greeted by Ashuelot Reis, a nature spirit who reveals that there is no treasure inside, but instead a powerful Zarosian general known as Nex and her army. Ashuelot explains Nex's history to the player before disappearing to the inner lobby area of the prison. This completes the miniquest.