From Old School RuneScape Wiki
Jump to: navigation, search
This article is about The Gauntlet. For the gloves, see gauntlets.

The Gauntlet can be found by entering the Gauntlet Portal, found in the northwestern part of Prifddinas.

Players cannot bring any items within The Gauntlet; a chest can be found by the entrance to temporarily store their items before they enter, but are returned once they leave The Gauntlet. In addition, it is classified as a dangerous minigame, despite not requiring any items to participate; rather, it means hardcore ironmen will lose their hardcore status should they die in The Gauntlet.

The area contains crystals, roots, herbs and fish obtainable through Mining, Woodcutting, Fishing and other gathering methods, in order to make weapons, armour, potions and food. These various resources will not require a specific skill level to gather, though higher skill levels will grant more resources at a faster rate. The dungeon will also contain various crystalline monsters, such as bats, unicorns and dark beasts, which can be killed for further supplies. Higher level monsters will offer better drops at the cost of taking more time to defeat.

Completion of The Gauntlet will reward players with various loot, including crystal armour seeds for crystal armour, the Blade of saeldor, and crystal shards to charge the previous items. Failing to finish, either by death or leaving early, will give a small token reward based upon how well the player performed, but won't grant any chance of unique items.

The player will spawn in the center room of a 7x7 grid of rooms. One of the adjacent rooms will contain the Gauntlet's boss, the Crystalline Hunllef. The player has a 10 minute timer to prepare to fight this boss, after which the player will automatically get teleported into the boss room. The player can also choose to manually enter the boss room. 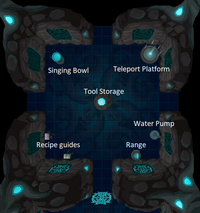 The player starts with the following items in their inventory:

Each room in the Gauntlet, excluding the starting room and the boss room, contains the following:

The player should create 2 different types of weapon for the final boss. The cost for each weapon type is the same.

Crystal harpoon, the player can fish for

Raw paddlefish which can be cooked in the starting zone to produce food that heals 20 per inventory slot.

A player may also craft additional

Crystal shards x 40 to teleport back to the central room. This can be done if the player has additional unneeded shards. The teleport crystal is occasionally dropped by monsters.

Lastly, a player may make

Egniol potion (3). The recipe is as follows

The boss room contains the Crystalline Hunllef. It has 600 hitpoints. 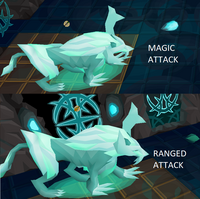 Standard attacks of the Crystalline Hunllef

The boss uses the following mechanics: 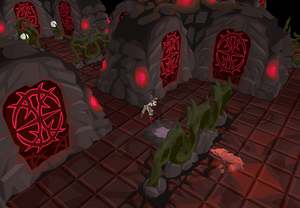 Gauntlet completed
The jingle that plays upon completing the Gauntlet.

Upon completing the challenge, players will receive 2 rolls on the regular loot table, as well as several crystal shards, and a chance to roll an Elite clue. For more information on the loot table, visit the Reward Chest's page.

Upon completion of the Corrupted challenge, players will receive 3 rolls on an upgraded loot table.