The Giant Dwarf is the first quest in the Rise of the Red Axe quest series. It involves the dwarven capital Keldagrim and The Red Axe consortium who are in control of the city.

{"requirements":"* <span class=\"scp\" data-skill=\"Crafting\" data-level=\"12\">[[File:Crafting icon.png|21x21px|link=Crafting|alt=Crafting]] 12 [[Crafting]]</span> <sup>(<span title=\"This requirement is boostable\" style=\"cursor:help; text-decoration: underline dotted;\">boostable</span>)</sup>\n* <span class=\"scp\" data-skill=\"Firemaking\" data-level=\"16\">[[File:Firemaking icon.png|21x21px|link=Firemaking|alt=Firemaking]] 16 [[Firemaking]]</span> <sup>(<span title=\"This requirement is boostable\" style=\"cursor:help; text-decoration: underline dotted;\">boostable</span>)</sup>\n* <span class=\"scp\" data-skill=\"Magic\" data-level=\"33\">[[File:Magic icon.png|21x21px|link=Magic|alt=Magic]] 33 [[Magic]]</span> <sup>(<span title=\"This requirement is boostable\" style=\"cursor:help; text-decoration: underline dotted;\">boostable</span>)</sup>\n* <span class=\"scp\" data-skill=\"Thieving\" data-level=\"14\">[[File:Thieving icon.png|21x21px|link=Thieving|alt=Thieving]] 14 [[Thieving]]</span> <sup>(<span title=\"This requirement is boostable\" style=\"cursor:help; text-decoration: underline dotted;\">boostable</span>)</sup>","desc":"Five hundred years have passed since the rule of King Alvis, saviour of Keldagrim and victim of his own inventions.\n\nHe founded the Consortium: the gathering of Mining companies that were to serve the monarchy. But, eventually, the monarchy came to serve the Consortium.\n\nBy the time of his death, the monarchy was all but abolished. Now the Kings in Keldagrim are but a distant memory... with only the statue of King Alvis to remind the people of the old days, the dark days.\n\nSo begins the Rise of the Red Axe, the new multi-part storyline centred around the dwarves and their capital of Keldagrim. The first quest, The Giant Dwarf, introduces the city and the powerful business Consortium that rules the dwarven realm. Discover weird goings-on, narrowly escape from falling chunks of rock, ride around in minecarts and... make sure you don't bump into the wrong person on the way to the city!","difficulty":"Intermediate","kills":"None","name":"The Giant Dwarf","start":"The [[Keldagrim]] mines east of [[Rellekka]] and north of the [[Mountain Camp]]. Follow the dwarven statues to the underground river.","length":"Medium","items":"* 200 [[coins]]\n* Means to cast [[Telekinetic Grab]] ([[air rune|air]] and [[law rune]])\n* [[Logs]] (most logs will work, however, arctic pine, redwood & coloured logs do not work)\n* [[Tinderbox]]\n* [[Coal]] (obtainable during the quest with 30 [[Mining]])\n* [[Iron bar]]\n* 3 cut [[sapphire]]s (purchasable during the quest)\n* Various [[ores]] and [[bar]]s (mostly obtainable during the quest, see below)\n* [[Redberry pie]] (unless you have previously given [[Thurgo]] a pie for free -- outside the [[The Knight's Sword]] quest)"} 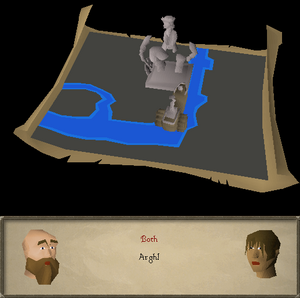 Crashing into the dwarf statue.

Travel to the Dwarven Boatman inside the dungeon east of Rellekka, which is located south of Olaf. The fastest way to get there is by using Fairy rings to dks.

Upon entering the dungeon, go through the cave entrance between the two statues; don't go south past the monsters, as that takes you to the base of Trollweiss Mountain.

When you enter, speak to the Dwarven Boatman (not the Dwarven Ferryman) and ask him to take you to Keldagrim to start the quest. A cutscene will ensue where he tells you about Keldagrim's rich history, before the "boat" malfunctions and crashes into the statue of King Alvis. Upon arriving at Keldagrim, you are arrested by two Black Guard Berserkers, and taken to the Black Guard headquarters where Commander Veldaban wants to talk with you. He asks you to replace the statue that was in need of replacement anyway.

You can now use the Keldagrim minecart system throughout Gielinor.

Talk to Blasidar the sculptor. He lives in the eastern side of Keldagrim, across the bridge, south of the kebab shop. He will make you the statue if you can get him clothes, an axe and boots "fit for a king" (Riki will wear them as a model for the statue). It is advisable to complete the axe part of the quest last, as Thurgo will teleport the player directly to Blasidar.

Note: A tinderbox can be purchased from the general store on the west side of town, and coal can be mined on the east side of town

Talk to Vermundi, the silk trader in the corner of the east marketplace, and ask her about making the king's clothes. She can, but first she needs a picture of the clothes. Talk to the dwarf librarian in the library across the Keldagrim bridge. He tells you to search the library for a book about dwarven clothes. Climb any bookcase with a ladder in front of it to find the book on costumes.

Note: If you weigh 30 kg or more, you will be unable to climb the ladder. You can simply drop some items and then pick them back up.

Give Vermundi the book. You now need to fix her steam-powered spinning machine. Use the coal on her machine with logs in your inventory, then use your tinderbox on it (you will need at least

16 Firemaking for this part). If you fail to light the machine, just use your tinderbox on it again. Once the machine is lit, talk to her again and pay her 200 coins to get the exquisite clothes.

Go to the south-western anvil in Keldagrim (south of the Black Guards' HQ) and ask Saro about the boots. He sold them to Dromund, another dwarf in Keldagrim. Speak to Dromund in his house just north of the bank. He refuses to sell you the boots, so you will have to steal them from him.

14 Thieving). The right boot is on another table, but you cannot steal it from inside the house because his cat watching over it. In order to steal the right boot, you need to go outside, stand in the window where the right boot is in plain view, then use Telekinetic Grab on it. Like the left boot, you'll first have to wait for Dromund to have his back turned.

Once both boots are obtained, they turn into Exquisite boots.

An axe fit for a king[edit | edit source]

Items needed: An iron bar, 3 sapphires, and a redberry pie (if you have not given Thurgo a free redberry pie in the past, with the required redberry pie for The Knight's Sword not counting).
Santiri's location
Thurgo's location

Talk to Santiri, the tradesman of the sword shop in north-west Keldagrim. He talks about how his family came to possess the Dwarven battleaxe, mentioning it has been damaged and that the sapphires on the hilt had either been stolen or washed away. During the dialogue where you offer to repair the axe, Santiri may note your mastery of Smithing but exclaims that even you aren't skilled enough. Use three sapphires on it to rebuild the hilt. Talk to Santiri again, who says that only an Imcando dwarf could repair it.

If you have not completed The Knight's Sword, Santiri will refer you to the librarian, just east of his shop. Ask him about finding an Imcando dwarf. He refers you to Reldo in the Varrock Palace. Speak to Reldo and he will teach you about them.

If you have completed The Knight's Sword, your character will mention that they know an Imcando dwarf and you can go straight to Thurgo.

Thurgo resides in the single house at Mudskipper Point, south-east of Rimmington and south of Port Sarim. The fastest way to get there is to travel using Fairy rings to AIQ. Go to him with an iron bar, and ask him to repair the axe. After that, if you have not yet given him a redberry pie for free previously, you must give him one now. He will then repair the axe.

Note: If you happen to lose the axe after having it repaired, Thurgo will supply you with another repaired axe, although it is ungemmed and you will need to apply three sapphires again.

When Thurgo is done, you have the option to return immediately to Keldagrim. This will place you back in Blasidar the sculptor's house.

Give Riki the axe, clothes and boots by using them on him. Talk to Blasidar, who explains that the Consortium wants the head of the statue modelled after one of its directors, but has not agreed which one. He asks you to go and help them make a decision. You will see a short cutscene of the incomplete statue.

Make sure to complete this step before starting the tasks below, or the tasks for the director will go on indefinitely!

There are eight mining companies in the Consortium, which are located upstairs in either the east or west marketplace. You will need to join one of them, and this choice will only change the final model of the statue built at the end of the quest. You should choose a company on the west side of the building for faster bank access if you already have the materials in your bank, and on the east side if you want to purchase the materials from the ore seller or the Grand Exchange, for faster minecart access. If you fail a task and are unable to obtain a new one, logging out and logging back in should fix the issue.

Talk to the secretary of the company that you want to work for. You will be given several errands to collect 1-5 of a certain material within a time limit. The possible items are clay, copper ore, tin ore, iron ore, silver ore, gold ore, mithril ore and coal. With the exception of clay, all materials can be mined or bought nearby, if they are not already in your bank or inventory. Cannot be noted. You can ask for a new task if you don't like the one you are given, although doing this too often will reset the progress with the company.

Warning: Ensure you perform tasks only for the company you want to choose, as the progress for each is separate and will therefore be wasted.

After completing about 4 errands, you will be told that the director wants to speak with you. At this point you may start doing errands for the Director, who will request different items from you. These items include bronze bars, iron bars, steel bars, silver bars, gold bars and mithril bars. Cannot be noted. As with the Secretary, you can request a new task to replace the one currently given, however doing this too often will also reset the progress with the company.

When you have completed enough tasks for the Director, you can ask to join the company. Tell the director that Blasidar sent you, and that you will vouch for them at the next Consortium meeting.

Return to Commander Veldaban (west of the bank) and tell him you will go to the meeting. You will see a cutscene of about 4 minutes. You can also skip the cutscene by refusing to go to the meeting; you can read a summary of it in the meeting notes, received after completing the quest. 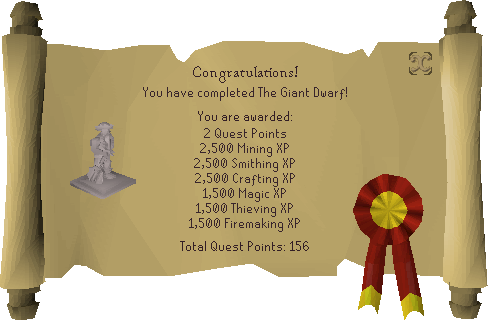 Completion of The Giant Dwarf is required for the following: