From Old School RuneScape Wiki
Jump to navigation Jump to search
This article is about the quest. For the music track, see The Golem (music track).
The RuneScape Wiki also has an article on: rsw:The Golem

The Golem is a quest centred around the remains of the city of Uzer in the Kharidian Desert. Long ago, the city, which was defended by an army of clay golems, was destroyed at the hands of the demon Thammaron, leaving only ruins and a single clay golem remaining. You must utilise this golem to find the truth behind the city's destruction.

To start this quest travel to the Ruins of Uzer and speak to the golem. To get there, use the Necklace of Passage teleport to Eagles' Eyrie. Steal a Phoenix Feather and mine some clay while you're here if you don't already have them, then run south-east. Alternatively, take fairy ring code dlq and run north-east. Once you get to Uzer, offer to repair the golem to begin the quest. (Note: Stealing a phoenix feather is a medium task in the Desert area.)

The clay mining spot. The desert phoenix can also be found nearby.

Items needed: 4 soft clay or a bracelet of clay and a pickaxe
Items recommended: Digsite pendant or Digsite teleport.

The first thing you should do is repair the broken clay golem. If you did not bring your own clay, go north-west and mine four pieces of clay while wearing a bracelet of clay to mine soft clay.

As you use the soft clay on the broken clay golem, he will become less damaged and finally repaired. He will tell you that he was programmed to destroy a powerful demon, Thammaron. You need to help him slay the demon. Make sure to ask him how to open the portal. Outside the temple ruins, near the golem, there is a letter. Take the letter and read it.

The location of Elissa.

Go to the Digsite east of Varrock. Quick ways of getting to the digsite are using a Digsite pendant/teleport or the gnome glider. Find Elissa in the north-eastern part of the Digsite, She is wearing yellow and brown robes. Tell her you found a letter with her name on it. She will tell you about her late husband's notes and where they are located. After talking to her, go to the Exam Centre and search the south-eastern most bookcase. You will find Varmen's notes. Read them before progressing. 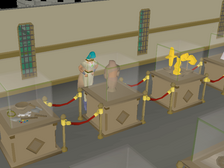 The player steals the statuette.

Go to the Varrock Museum and ask Curator Haig Halen on the ground floor[UK]1st floor[US] about a missing statuette. You must have the strange implement in your inventory to ask the Curator about the statuette. Then, pickpocket him to get a display cabinet key. Unlock the display case upstairs to steal the statuette. It is on the 1st floor[UK]2nd floor[US] in the first row of display cases and the fourth case when you ascend the stairs (display case 30). 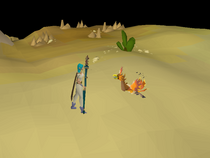 The Desert Phoenix, near the clay mine.

Before going back to Uzer, make sure you have the required items listed above in your inventory. If you don't, there's a bank just south of the museum.

Head towards the ruins of Uzer from the Shantay Pass or through the dlq fairy ring. If you're walking back to the ruins from Varrock, after you cross the bridge, go north along the east bank of the river to get there. 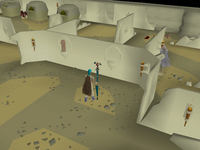 The alcove in the centre where the statuette goes.

At Uzer, enter the dungeon near the golem and go to the middle. Use the statuette on the empty alcove on the wall. Turn all of them north to face the double doors to unlock the demon's lair. Go inside to discover that Thammaron had perished from his wounds from the battle long ago. Should you wish to do so, use your chisel and hammer on the throne to get six gems which you can keep. Go outside and talk to the clay golem again. He was not programmed to believe that the demon is dead, so you'll need to reprogram him.

With an empty vial in your inventory, use your pestle and mortar on the black mushroom to make black dye. Use the phoenix feather on your ink to make a phoenix quill pen, then use it on your papyrus to write a Golem program. Go back to the clay golem. Use the strange implement and then the golem program on him to get your reward. 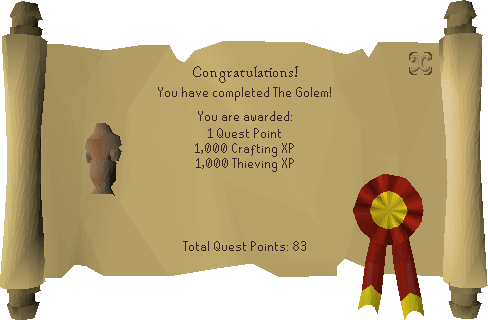 Completion of The Golem is required for the following: