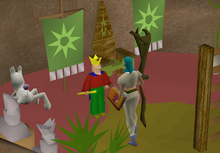 Talking to the king.

Speak to King Narnode Shareen on the ground floor[UK]1st floor[US] of the Grand Tree. He will take you underground and ask you for your help reviving the Grand Tree, which is ill, and give you a translation book and a bark sample.

Take both these items to Hazelmere. He can be found on a small island east of Yanille. There are jungle spiders (level 44) on the way to his house, although they are not poisonous. There are several ways to reach him easily:

Talk to Hazelmere. You cannot understand his language and vice versa, but you can communicate with the help of sign language regardless. He will take your bark sample, and after examining it, he will give you a message. When translated using the translation book it reads

Return to King Narnode in the Grand Tree, and tell him the message above. He will ask what the translation is in three lines, so pick each line from the choices offered. If none of the options match, select the "None of the above" option until the correct option presents itself. For the first line, you have to go to the third set of choices offered. He will explain that someone used his seal to have Hazelmere give away Daconia rocks, which were made as a "fail-safe" and can kill the tree. He will direct you to talk to Glough, his head tree guardian.

Glough is located south of the Grand Tree, east of the ramp, in a tree house. He will tell you that he will take care of the problem. 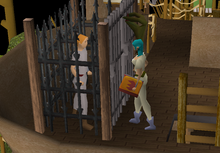 The prisoner, whose name is Charlie, will tell you that he had Hazelmere give the Daconia rocks to him, though he was only doing as Glough asked him to do. He tells you to search Glough's house for evidence. Go to Glough's house. Search the cupboard, and you will find his journal. Talk to Glough, who then orders the guards at you. After the conversation, you will be put in the cell next to Charlie's. Talk to Charlie, he will tell you about the Ship Yard on Karamja, and give you the password to access it, which is Ka-Lu-Min.

The king will appear and apologise for Glough imprisoning you. He will tell you that guards are watching the entrances, and tells you to quickly escape on the Gnome glider on the top floor of the Grand Tree, next to the cells. Talk to the pilot, and he will fly you to the Ship Yard.

The glider will crash land just west of the Ship Yard. Run east past the level 53 jogres, they could attack you(so be wary of this if you're a low level). Once you reach the Ship Yard attempt to open the gate. A shipyard worker will stop you. Tell him Glough sent you. He will ask for a password (Charlie told you it is): Ka-Lu-Min. After confirming the correct password he'll let you open the gate.

Go out to the southern docks and you'll find the foreman. Once you find him you have two choices. You kill him (he is a level 23), or you talk to him. Both will result in you getting proof of Glough's plans.

If you choose to talk. Tell him Glough sent you. He will then take you somewhere private. You'll need to answer some personal questions about Glough.

He will ask how his wife is, select "Sadly his wife is no longer with us". He will then ask what his favourite dish is, select "Worm holes". Finally, he will ask for his new girlfriend's name, which is "Anita".

Once you've made your choice and you've got the lumber order, return to The Grand Tree. If you have completed the Tree Gnome Village quest, you can use a Spirit tree to teleport there directly. If you haven't then make your way to the Tree Gnome Stronghold front gate and talk to Femi. Tell her you need to get inside, and she will sneak you in. If you haven't helped her previously, she will charge you 1,000 coins. If you have, she will help you for free.

Note: If you've never used the Stronghold entrance before (i.e. you've always gotten in via a Spirit Tree), Femi will say that you helped her and let you in for free.

After you show the king the note from the foreman, he still will not believe your accusations, call you as paranoid as Glough, and ask you to leave for your own safety.

Anita's house on the map.

Speak to Charlie again on the top floor of the Grand Tree. He will suggest you speak to Anita, Glough's girlfriend. Go and talk to her. She is near the swamp to the north-west of the Grand Tree in the north-western-most house; you have to go upstairs. She will give you a key and ask you to return it to Glough.

Opening the chest for the notes.

Go to Glough's house, and use the key to open the chest. Inside, you will find some of his notes detailing his plan to seize control of Gielinor. Click "Continue" otherwise you won't get the notes. Take the notes to King Shareen. He will still not believe your evidence. He will tell you that in their search of Glough's house all they found were four bundles of twigs. They spell out the word TUZO. Using the Translation book, this translates to "open." The King will give you all four bundles of twigs.

Note: You must have at least 4 free inventory spaces in order to receive the twigs! 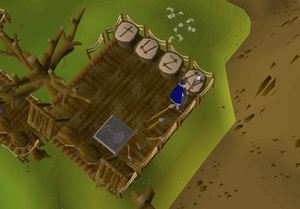 Using the twigs on the pillars.

Return to Glough's house, and climb up the watchtower. This tree is located on the east side of the 1st floor[UK]2nd floor[US] and requires 25 Agility to climb. Up in the watchtower, you will find a stone stand and four pillars. Use the twigs with the four pillars to spell out TUZO, starting from the far left. After you have placed the twigs on the four pillars, you will hear gears turning. You can now open the trap door on this platform, but do not go in yet unless you are prepared for the fight.

Items needed: Combat equipment and food to last in a fight against a level 172 Black demon

After you enter the trapdoor, Glough will come and talk to you, threatening you with his plans to wipe out humans.

After the conversation concludes, a level 172 black demon will appear to the west and attack you.

It can be fought with any combat style, but can be safespotted with Ranged, Magic or a halberd. To safespot, stand where Glough is during the fight, if the black demon can still attack you, move back behind another rock until he can no longer attack you. You can also go into the tunnel to the west to where the demon cannot reach and safely attack him using ranged or magical attacks. He can also be safespotted by standing north of the ladder.

Note: If the demon is not killed within 10 minutes, it will disappear and the battle needs to be restarted. To do so, walk through the tunnel and leave through the ladder next to King Narnode Shareen, and re-enter Glough's trapdoor.

For 10HP Pures: With Bind, it is possible to kill the demon with a cannon. Wait until the demon is close to you and bind him. Then, run to the tunnel (don't run straight or the Demon might hit you!). Once in the tunnel, attack one of the rats, and get back to the main area. Since you are already being attacked, the demon won't be aggressive. Place the cannon, make it start and run to the safespot! Rinse and repeat when you have to charge the cannon.

Warning: The second safespot pictured below is dangerous for Hardcore Ironmen, or those with low Hitpoints, due to the likelihood of being drawn into melee range and the Black demon having a max hit of 16.

After defeating the demon, walk along the passage until you find King Shareen standing by a ladder. Talk to him and tell him that Glough had sent a demon to attack you, but he will not believe you. He finally sends a guard to scout for Glough, to which the guard comes back with Glough, who was hiding amongst the stones. The king apologises, and asks you to locate the last Daconia rock.

Search the roots all around the area until you find the Daconia rock. Though it can be time-consuming, you might need to search all of the roots. If you somehow lose the rock, it'll spawn in the root where you first found it.

When the dialogue pops up stating that you found the stone, click continue or it won't appear in your inventory. After obtaining the rock, talk to King Shareen again for your reward for saving the Grand Tree. 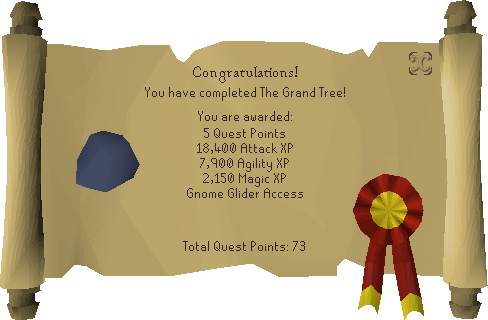 Completion of The Grand Tree is required for the following: