From Old School RuneScape Wiki
Jump to navigation Jump to search
The RuneScape Wiki also has an article on: rsw:The Great Brain Robbery

The Great Brain Robbery is the fourth quest in the pirate quest series. In the quest, you help a group of Saradominist monks from Harmony Island. Their once peaceful island has been taken over by a horde of zombie pirates, led by Mi-Gor, a very dangerous individual.

Note: Leave your follower in the bank, otherwise you will not be able to go diving.

Near the dock, you will notice a rather sickly-looking monk named Brother Tranquility. Talk to him to begin the quest — select the option regarding undead pirates. He will explain how some of his fellow monks are in trouble and asks for help. Accept the offer to be teleported to Harmony Island. 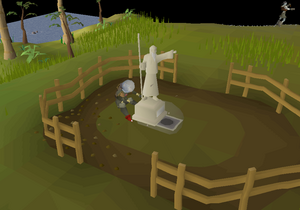 When doing the Hard Morytania Diary, you can plant your watermelon seeds now, so you can harvest them at the end of the quest.

Make sure you have the supplies listed earlier and head outside the windmill. Zombie pirates (level 57) are aggressive and will attack. A short way to the north will be a Saradomin statue that can be pulled. Pull the statue. Go down the hole and into a tunnel. It is full of water, so equip the diving gear to submerge beneath the water. Note that you cannot enter the water if you are carrying a follower such as a pet cat. Run past the zombie pirates and repair the stairs at the far end of the tunnel (you can be attacked while repairing the stairs and it takes a while). Go up them, climb up the ladder in the next room; then, look through the peephole to spy on the enemy. 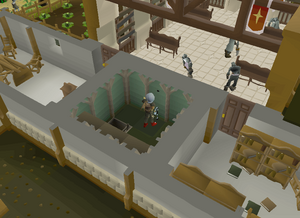 The secret room, peek through the hole.

Report back to Brother Tranquility. He will suggest getting a book that can be used to pray away poison. Travel to the Monastery near Edgeville to find the prayer book in a bookshelf towards the south-west corner of the building on the ground floor[UK]1st floor[US]. Read the book, which provides instructions on how to use it. Equip a holy symbol and return to Harmony Island by talking to Brother Tranquility. The zombies have begun to gas the windmill, so right-click the book and select "recite-prayer." After this, make sure to talk to Brother Tranquility.

Now that the monks are no longer in danger of being poisoned, they would like to get their brains back in their bodies where they belong. Travel to Dr Fenkenstrain in his castle, climb up either stairs, and then climb up the ladder in the jail cell in the middle of the room. After a bit of negotiation, he agrees that a new home free of the threat of being eaten sounds better than where he is. However, he does not want to risk being eaten while travelling. He is also allergic to teleportation, so another way needs to be found.

Head to Canifis and talk to Rufus, the owner of the meat store north of the bank. Make sure to be wearing the ring of charos while talking to him. Rufus will give you some crate parts and a wolf whistle. You need to build ten decoy cats to fill the crate since Rufus assumes the crate will be transporting cats.

Tip: Since you are right next to a bank, deposit the whistle and crate parts and take out Mos Le'Harmless teleport (treasure trail), 10 wooden planks, 10 pieces of fur, and a hammer — home teleport runes or tab and an ectophial are advised for easy travelling. If you do not have a Clockmaker's bench yet, you will also need to bring 4 oak planks and a saw. Also, if you still need fur, you can kill Canifis villagers—they'll transform into level 88 werewolves if you don't use Wolfbane, so be careful. You can also obtain fur by thieving from stalls in Ardougne (or trading the fur trader there) or by purchasing fur in Varrock square for 20 coins apiece. Ultimate ironmen may find a table in the south-west tower of Fenkenstrain's castle on the first floor helpful. 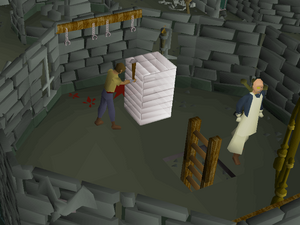 Travel to a player-owned house that has a Clockmaker's bench. Craft the materials into 10 wooden cats. Grab your ring of charos, the 10 wooden cats, 4 planks (normal), a hammer, ~50 nails, the crate parts, and the wolf whistle before travelling back to Fenkenstrain's castle. Return to Dr Fenkenstrain and build the crate on the crate hotspot. Then use the extra (normal) planks of wood to build a false bottom by clicking on the crate again and selecting "add-bottom." Fill it with the fake cats and then use the wolf whistle Rufus gave you to call him. Fenkenstrain will automatically get in the crate.

Once past inspection, Rufus will give you a shipping order. Use this on the crate, and it will be teleported to the island.

Now that the doctor is on the island, travel back to Mos Le'Harmless. Use the island bank to grab a hammer, diving gear, armour, and a weapon before teleporting to Harmony Island. Dr Fenkenstrain is in the basement of the windmill and needs some equipment to perform the surgery. He will give you a list of items to collect:

Luckily, the bad guys already have what you need since they performed the surgery in the first place. The only problem is how to get inside the building.

The player creates an explosion to open the door.

Put on the diving suit to avoid passing out from the gas, and head north from the windmill to the ship beached nearby. Search the locker on the ground floor[UK]1st floor[US] to get a fuse; then, climb up a level and get a tinderbox and a keg of powder. With these in hand, go back to the front door of the monastery. Use the keg in the front door, add a fuse, and then, light it. The door is now open.

The gruesome operation, replaced with a cute cat playing with a ball.

Once inside, kill the 4 Sorebones to obtain all the needed equipment, which can be safespotted behind benches. You must pick up the dropped items after each kill, or else you will just get duplicates. Walk back to the windmill, head downstairs, and give all this to Dr Fenkenstrain to begin the gruesome surgery. A cutscene of a cute cat playing with a ball will ensue due to the surgery being too gruesome. Make sure to speak to Brother Tranquility after the operation.

Return to the bank on Mos Le'Harmless and grab all the armour, food, and potions you will need for the fight. Note: You still need to wear your diving suit.

Go back to Harmony.

When you enter the monastery, only Mi-Gor will be there, giving you the option to confront him. When you do, he will summon his monstrosity, a giant mess of machinery named Barrelchest, to attack you. 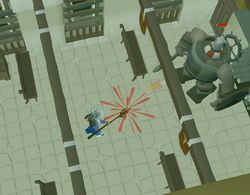 Prayer (and also Defence) drains faster than usual during the fight, and Barrelchest will turn your Prayers off, but just keep turning it back on (note: repeatedly turning it on can be a huge time waste and result in death if he gets lucky with the timing of his hits, plan to do this without prayer to avoid that). Bringing several prayer potions and at least ten good food is highly recommended. Barrelchest is a fairly blunt instrument; he will not use anything but Melee attacks, which are fairly inaccurate; however, when he does hit, they are almost always 20's. It is possible to catch him on the side of a pew and attack him from a distance without any sort of retaliation by standing behind benches for safespotting. This makes ranging or maging an incredibly effective way to take out Barrelchest. However, do not hide behind a pew when attempting to do this. Catch him on the corner of the first pew by taking a few steps back when you first start the battle, or he will strike the ground with his anchor and cause 25 damage. Alternatively... just teleport out when you encounter him and make your way back to the boss room but don't move anywhere; the spot you will be standing in serves as a safespot.

Once you have killed Barrelchest, pick up his anchor and walk back to the windmill to inform Brother Tranquility of your victory.

He will thank you and give you a lamp granting 5,000 experience in the skill of your choice.

Note: If you died during the boss fight, you will need another fishbowl helmet and diving apparatus to recover your items. Otherwise you'll need to visit Death in his office. 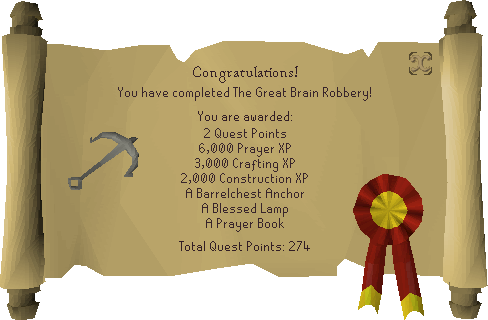 Completion of The Great Brain Robbery is required for the following: