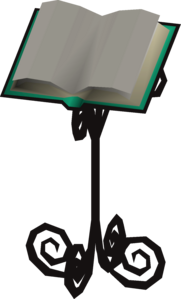 The Great Expedition is a book mounted on a lectern, found in the southern part of the Library Historical Archive. It cannot be removed from the lectern it is on.

The book notes King Shayzien VII's request to explore and expand the kingdom's territory westwards, and the recruitment of the party members that will embark on the expedition to the mountain beyond the swamps of the Kebos Lowlands.

The following text is transcluded from Transcript:The Great Expedition.

King Shayzien VII has ordered a Great Expedition to explore the lands to the West. His Royal Highness is keen to explore and expand the territory of Kourend. We are to gather the brightest minds and bravest warriors from Kourend and form an expedition party.

I have requested a team to survey the immediate area to the west. We will need this information to determine the level of danger and scope of the mission.

The survey team reports findings of a mountain to the west of their encampment beyond a swampy area. The mountain will be the focus of the expedition.

We have appointed Commander Magnus Rimor leader of the party.

Following a week of interviewing and selection process, Commander Rimor has selected the remainder of the expedition party.

Commander Rimor is fearless; he seeks to serve King Shayzien with all of his will. Having completed three expeditions to the Northern Tundras in recent years, he is the bravest soldier and most seasoned explorer we have.

Doctor Crushim is Kourend's most renowned field physician having saved the life of the king himself during an excursion last decade. Her expertise in healing and tactical ability will be invaluable to the party.

Though young, Lieutenant Thomas Berlin is the finest navigation officer in the fleet. He was the first officer to sail from Port Piscarilius to the Frozen Tundra of the North and live to tell the tale.

Sergeant Garvie is a tactical expert, known for his skills with explosives and a longbow, his scouting skills will be a necessity as the party encounters unknown dangers.

Corporal Edshirt recently returned from a trek to the north and will serve as a weapons officer on the expedition.

A veteran of the Shayzien army, Corporal Jones is known for his strength and ability with a longbow. Watch out for Keith.

250 Days to ascend the western mountain and return with details of the findings.

Commander Rimor and his part leave at first light!