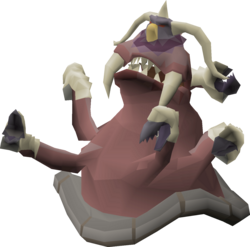 The Inadequacy is the first boss fought in the quest Dream Mentor. Due to its fairly high Defence level and a low Magic level, players should use Magic e.g. trident of the seas or Iban Blast in order to kill it effectively. This monster is very powerful and should not be underestimated, as it uses accurate and hard-hitting attacks. It summons Doubts, which serve as an annoyance to the player, as all of them are killed when the boss dies. After this monster is killed, it transforms into its second form, The Everlasting.

Note: Prayers cannot be utilised in this battle or any of the others after it. Should players die or choose to leave during the middle of the fight, they must start the entire battle over from The Inadequacy.

The most efficient way to defeat this boss is by wearing the best melee armour the player can equip alongside a staff or trident, as even if the player has a negative magic attack, they will still be able to hit often with Magic due to the boss having no Magic defence. The boss's Ranged attack is able to deal considerably more damage than its melee attack, so maintaining melee distance is advised at all times.

The boss will periodically summon Doubts which are seen as a distraction as killing them provides no real benefit to the player as all of them are automatically killed when the boss dies, and it may spawn more after the player manually kills them anyway. If necessary, the player can try positioning these Doubts behind the boss if they do not want to be under attack by them, although they are far more weaker than the boss in comparison and usually not a problem. Having auto-retaliate off is advised while eating food as it may cause the player to inadvertently attack the Doubts instead of the boss.

Players who think they might have to escape the fight via the lectern should bear in mind that while running away they will be hit by multiple Ranged hits so it is advised the player does not have their inventory completely depleted when fleeing, to not risk the chance of dying while fleeing.