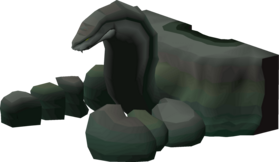 The Jormungand is a massive basilisk and the final boss of The Fremennik Exiles. After being subdued by V many years ago, he is reawakened by Bakuna.

The Jormungand's basic attack styles are Melee and Magic. He also has two special attacks:

Should the player die during this fight, they can reclaim their items from Brundt the Chieftain on the Island of Stone for 50,000.