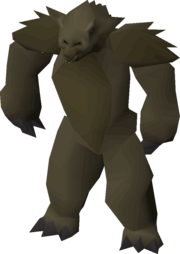 The Kendal is a monster from the Mountain Daughter quest. He is located in the cave north of the Mountain Camp.

At first, the mountain people believe him to be the Kendal, one of their gods. However, he is actually a man in a suit. The player discovers the Kendal's secret after laughing at him and stating he looks like a man in a suit, to which the Kendal exclaims with "How did you find out!?"

He later admits he is a man living in solitude within the cave, taking on the persona of a god in order to be left alone. He also reveals himself to be a cannibal, stating that the corpses scattered about the centre of the room were victims who found his lair.

Once the player kills the Kendal they obtain the Bearhead and are able to put the chieftain's daughter, Asleif, to rest. 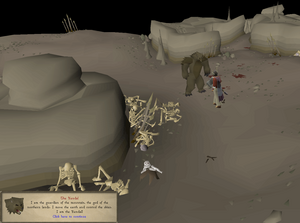 The Kendal proclaims his godhood. 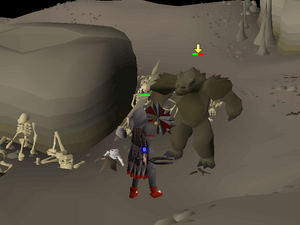 A player fighting the Kendal.

It is a relatively easy fight that does not require much food, unless you're a lower level. Protect from Melee will fully negate his damage, but a Prayer potion may be necessary. A dwarf multicannon can be set up in the area to help kill the Kendal.

The Kendal can be safespotted with Magic or Ranged by using the skeletons around the pillar in the center of the cave.