Sir Vyvin's squire is in trouble. He has accidentally lost Sir Vyvin's ceremonial sword. Help him find a replacement without Sir Vyvin finding out.

The location of Sir Vyvin's squire.

You start this quest by talking to the Squire in the White Knights' Castle in Falador. The Squire will tell you he lost Sir Vyvin's sword, and would like you to help him replace it. He will tell you to talk to Reldo, Varrock's librarian.

Note: If you have completed The Giant Dwarf, you may skip talking to Reldo and go straight to Thurgo. (Your character will mention to the squire that they already know an Imcando dwarf)

Go to Varrock Palace, and go to the far north room on the ground floor of the palace to find Reldo. Ask Reldo about Imcando dwarves. He will tell you that one is located south of Port Sarim. If you haven't already made or bought a redberry pie, do it now. Consider getting two pies, if you're planning on doing The Giant Dwarf soon after this quest. Players can grab the pie dish spawn from the kitchen just east of the library if baking the pie themselves. Members can buy one from Romily Weaklax in the Cooks' Guild just west of Varrock (entry requires level 32 in Cooking and a chef's hat) (note: if you are an Ironman and have a low Cooking level it is useful to get the materials to bake multiple pies in case you burn one). When you have one, continue to Port Sarim and then head south.

Note: You have to talk to Reldo before you talk to Thurgo

Items required: Redberry pie, suggested Falador teleport or fairy ring (aiq) (teleporting to Pest Control via minigame teleports and then taking the boat is faster than walking or if house is in Rimmington, Teleport to House and then walk south)

You should see a small house on the side of a hill with a red exclamation mark. Look for Thurgo, who is an Imcando dwarf. Ask him if he would like some redberry pie. He'll take the one you have and eat it. Talk to him again to ask him about the sword. He says he'll need a picture of it. So, go back to Falador and talk to the Squire again.

Note: You have to talk to the Squire first before searching for the portrait.

You must go talk to the squire again who will tell you that Sir Vyvin has a portrait in his room. From the courtyard of the White Knights' Castle in Falador, go east through three doors, and then up the ladder. Go west through the door and then further west through the open doorway, then up the stairs. Sir Vyvin's room will be directly to the south. Open and search the cupboard inside his room. You will obtain a portrait that shows the sword. However, Sir Vyvin will stop you if he is in the room. There are six ways to avoid this:

Once you have the portrait, you're done at White Knights' Castle for now.

Note: If you already have 2 iron bars (4 if you want your own sword), or will definitely buy them, skip this part. Bring food for all four of the alternative options below.

If you don't already have the iron bars, you can get them very easily by buying them from the Grand Exchange. Make sure you bring them when you're going to Thurgo next, as it saves you a trip to a nearby bank. If you're an Ironman, and you wish to obtain them without buying or Smithing, you have 4 options. The first three involve killing (so at least the ability to survive a fight is necessary), the last one involves a trip to the Wilderness.

The first one is to kill Dwarves, head to either the ground floor or beneath the Dwarven Mines to find groups between combat level 10 & 14, which have a rare chance of dropping one iron bar. Make sure to loot them!

The second one is to take food from your bank, go to Thurgo without iron bars, talking to him, heading to the Asgarnia Ice Dungeon on the hill nearby and killing the Pirates there, as they have a rare chance of dropping one iron bar. They have a combat level of 26, and can be easily safespotted.

The third one is to go to the White Knights' Castle, bring some Magic (they have a weakness to Magic) or Ranged gear, and safespot White Knights on the second floor of the castle, in the jail-like room. Compared to the Pirate-option above, this requires more effort to get there and to kill a single one, but the drop rate of iron bars for White Knights (level 36, 38 and 42; not the level 39 ones) is uncommon instead of rare, and they can drop max. 2, instead of one. That makes it a viable option if you want to save time. They do have twice as many hitpoints compared to Pirates, so a high combat level (45+) is recommended.

The spawn point of an iron bar, north-west of Ferox Enclave.

The fourth option: a single iron bar can be found west of the Graveyard of Shadows next to the bears in some trees in level 18 Wilderness (hop to another world for more). Bring a teleport to get out of the Wilderness quickly after you have what you need.

Getting the blurite[edit | edit source]

Items required: A pickaxe, food (recommended), the portrait, 2 Iron bars (to save a bank trip - 4 if you want to make your own sword).

Don't forget to bring your pickaxe for this next step, and if you are at a low combat level, make sure that you take food with you as well! If needed there is an altar just north of the dungeon to restore prayer points.

Now that you have the portrait, talk to Thurgo, and give it to him. He now knows what kind of a sword he is making, a blurite sword, and he will need the materials to make the sword. You will have to enter the Asgarnia Ice Dungeon on the hill nearby to obtain the blurite ores. All enemies in the cave are aggressive, so bringing food could save your life. If bringing armour, it is recommended to bring plate armour or other slash-resistant equipment, as most enemies in the cave use slashing attacks. It is also recommended that you only bring a good pickaxe if you want two blurite ores so that you can get your own sword (you also need a Blurite ore for the Falador Easy Achievement Diary - to smith Blurite limbs on Doric's anvil). So, go down the ladder and walk through. When you see snow/ice ahead of you, be prepared to run. Run along the southern walls to find blurite ores. The rocks are bright blue. Mine one ore or two if you want your own sword. When you have the amount of blurite you want, run out. If you want to do the Falador Achievement Diaries, mine an extra blurite ore as it is necessary for one of the easy tasks.

It may be helpful to have a bodyguard to protect you from the aggressive monsters; however, if done correctly, a level 3 player can get the ore. If you die you will retain the ore, however, this obviously doesn't apply to Hardcore Ironman characters.

Note that there is a spot where the monsters cannot attack you. It is right next to the entrance to the members-only area of this dungeon. It is recommended that you mine at the blurite ore rock right next to this area, so you can easily retreat to safety if necessary.

Get back to Thurgo with your blurite ores and your iron bars. He will make you a sword. If you want a sword for yourself, drop it and ask Thurgo for a replacement. Pick up the second sword again.

Members planning on doing The Giant Dwarf soon after this quest are recommended to give Thurgo an additional redberry pie now, to avoid having to do this at a later point during that quest.

Go back to the Squire and he will take one of your blurite swords. After handing over the sword you will be done with the quest. 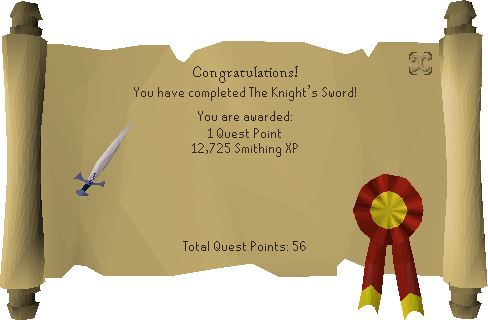