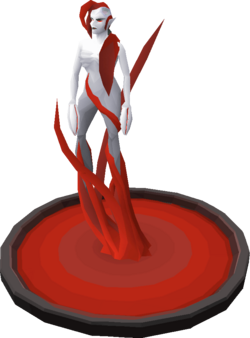 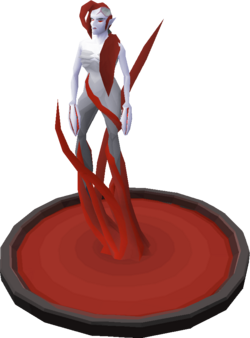 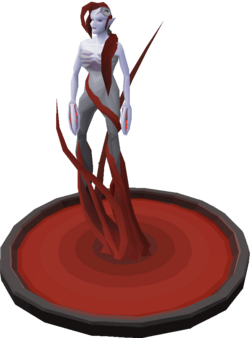 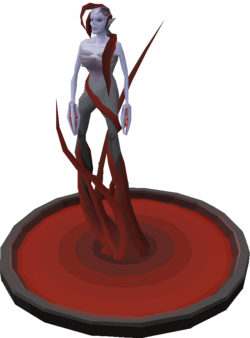 The Maiden of Sugadinti is the first encounter in the Theatre of Blood. She was formerly a human known as Serafina. A myth was spread by the vampyres that she had successfully completed the Theatre of Blood and was granted freedom from the vampyres; however, this was simply a ruse to instill false hope into the citizens of Meiyerditch so that they could provide entertainment for the vampyres.

As Serafina, she cared deeply for her brother, and she was willing to do anything for him. A vampyre offered to save his life in return for both of them being experimented on, which she accepted. As a result, her brother was transformed into the Abomination, while she was warped into the Maiden of Sugadinti, with her mind no longer her own. 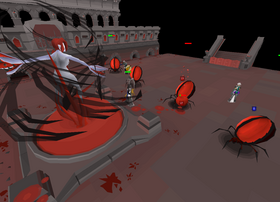 A group of players fighting Serafina, the Maiden of Sugadinti.

At 70%, 50%, and 30% hitpoints, the Maiden will spawn two Nylocas Matomenos per player in the room (up to 10) from the northern and the southern walls, which will walk straight toward her and heal her if they reach her. To stop this, players can freeze them with the help of Ice spells and then kill them while frozen. There are 10 spawn locations in which the nylocas can spawn; if there are less than 5 players in the party then the spawn locations will be random.

To properly freeze all healers, only three Nylocas must be frozen early, the most western ones, two north, one south. Then prioritise northern third and second south few game ticks before they meet in the centre. Once there, the rest will be frozen in the same spot on the consecutive barrage, leaving a clump of five for ice/blood barrage or chinchompas and three isolated ones. Causing multiple clumps will lead to few leaking to the boss.

Every Nylocas that reaches the boss will heal her for two times their remaining health and increase the damage of her basic tornado magic attacks.

Her tornado attacks are magic based and will prioritise the closest player to her, and if there are multiple players within the same distance, players are prioritised in their party's order (which correlates with the orbs on the top-left of the screen; the topmost player is prioritised first). Players not targeted by the Maiden therefore do not need to protect from Magic, although it is recommended to have active in case the other players move farther from her.

The Maiden will also throw blood spots at each player, and three blood spots at the player stood furthest away, dealing large amounts of damage and healing her every tick if not dodged. They have a chance to become a blood spawn which will track randomly around the room, leaving a blood trail behind it also. If a player stands on the trail, it will damage them and heal the Maiden for the same damage taken, as well as increase the chance of a blood spawn appearing. It should also be noted that taking damage from a blood spot also drains prayer.

If there are multiple blood spawns, it is suggested to freeze blood spawns and communicate with the teammates to swap gear, heal or restore magic up before progressing into the Nylocas phases.

Similar to TzKal-Zuk, the Maiden of Sugadinti will over-hit the player beyond their current health when damage is calculated; this makes it so you cannot tick-eat the maiden boss' magic attacks.

Blood Spawns are immune to damage but can still be frozen by the use of Freeze spells. It is highly recommended to keep the Blood Spawns frozen during the fight because the blood trail they leave behind doesn't disappear and will continuously begin to fill the room up with blood spots.

The Maiden's damage cap is also increased; meaning she can hit faster and harder than the regular version when Nylocas Matomenos reach her and players step on blood spots during the fight. This can often make it very difficult for players to complete since her damage can ramp up very quickly depending on the number of mistakes the team makes during the fight.

In entry mode, the Maiden can scale down to 20% of her original Hitpoints when done in a solo party. She will spawn fewer Nylocas Matomenos and the encounter is generally less punishing for mistakes due to her lower damage. This allows players the freedom to practice against the Theatre of Blood bosses without as much risk.