From Old School RuneScape Wiki
Jump to navigation Jump to search
The RuneScape Wiki also has an article on: rsw:Giant Mimic
This article is about the boss. For the item, see Mimic. 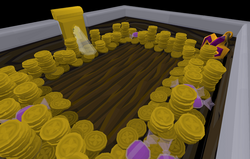 The area in which the player fights The Mimic.

Players have six chances to kill The Mimic from a master clue, five from an elite clue, which corresponds to the item rolls from the obtained casket. Every time a player leaves or dies, the amount of rolls on the drop table is decreased by one. If a player fails every attempt, they will not receive any loot from the original clue scroll.

With the right strategy, The Mimic is very easy to defeat for any high-level player. However, at combat stats around 70, The Mimic can pose a real challenge.

Always use Protect from Melee, move around the room when the Mimic throws sweets, and ignore the spawned Third Age minions. Use stat-boosting potions and prayers as well. 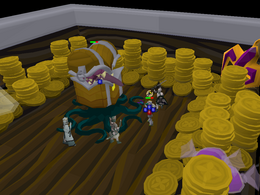 A player faces The Mimic.

The Mimic has three different attacks:

Bonus loot is occasionally received in addition to the regular 1-6 clue scroll rolls when opening the Mimic casket.