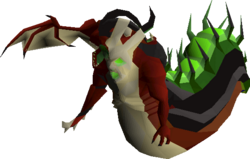 The Overseer is a parasitic organism residing in the Abyssal Nexus that serves to inform the player about the area. Behind it is the Font of Consumption, where players can place unsired in exchange for valuable items, such as abyssal daggers and pieces of the abyssal bludgeon.

The Font of Consumption, found behind The Overseer.

It explains the Abyssal Nexus contains Abyssal Sires, who are "engineers of this Abyss living pocket universe", and were imprisoned in the Abyss as well. As centuries passed on food began to deplete, and they were forced to construct the Nexus, using it to absorb demon flesh and weaving it into the wall's fabric, where they currently remain in deep stasis.

It has resided in the Abyss for a long time, and stated it had participated in the God Wars, when Zamorak sought reinforcements from any reachable plane. The Overseer and its party had reached the Abyss, seeking additional allies. However, they found themselves unable to escape, and there is no further mention of his party afterwards, leaving him as the only survivor. This had also caused him to miss out on the God Wars.

When the player speaks to it, he requests the player bring him the three parts of the Abyssal Sire (axon, spine, and claw), so that it may create a powerful weapon for the player. When creating the first bludgeon, the parts may be handed to the Overseer, who will hold onto the parts until all three are obtained.

The Overseer vanishes, leaving only a book.

Upon handing in the final bludgeon piece, it will create the weapon, and state that they easily tricked the player due to their desires. By absorbing the powers, it claims to have obtained enough power to escape the Abyss. It also tells the player that the weapon it has created is a "living weapon whose power is rivalled by few weapons in Gielinor". Despite having tricked the player, it was still grateful for their assistance and left behind an ancient tome to allow them to create more bludgeons if they wanted to before teleporting away to an unknown location.