The Slug Menace is the second quest in the Sea Slug quest series, and was the update to greatly expand upon the small fishing village of Witchaven.

To begin, talk with Sir Tiffy Cashien in Falador Park. He'll tell you about the city of Witchaven, which has had some rather strange things going on recently. He'll tell you to check in with their local agent in Witchaven, Col. Jake O'Niall. Sir Tiffy Cashien will then upgrade your Commorb to Commorb v2, which will start the quest. Use the contact option on Commorb v2 and head to Witchaven.

O'Niall sits on a rocking chair on the pier at the north-east corner of town. Talk to him, and he'll tell you that some of the people have been acting strangely recently, especially Mayor Eustace Hobb. Recently, he started looking rather sickly and working feverishly to restore the ancient, ruined shrine just west of town (between Witchaven and Ardougne). Before leaving, ask O'Niall about who the important people in town are, which are Mayor Hobb, Brother Maledict, and Holgart. Speak to each of them in any order.

Mayor Hobb's house is the one at the north-west side of Witchaven. Talk to him, and ask him about Witchaven or the shrine. When you are done speaking to him, don't go anywhere as Savant will stop you. She'll ask you to scan the mayor, so scan with the Commorb v2.

Note: You need to finish the dialogue with Mayor Hobb with "Nothing at the moment, thanks" after asking the questions to make Savant ask you to scan him. It takes 3–4 seconds before she contacts you after ending the conversation.

Brother Maledict will mention that he's a bit worried about some of his congregation, who have begun to act a little bit strangely lately. You can finish the dialogue without asking more questions. Walk a little bit north and talk to Holgart, who'll tell you that the mayor recently took his boat and gave it to another man named Jeb, standing near by.

Report back to O'Niall to tell him what you have found out so far. He'll suggest you go look into the shrine that the mayor is so interested in. 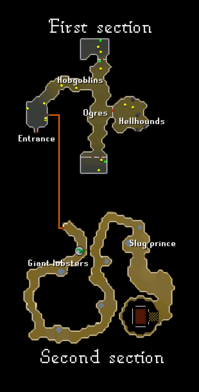 Walk a little ways west of town, and climb down the stairs to get into the shrine. Once you're inside, look at the minimap. You can see a red portion of wall indicating where there's a false wall that can be pushed open, and you'll find a new area. Inside are some aggressive level 45 giant lobsters in a winding tunnel. Walk through it, or take the Agility shortcut to get to where there's an imposing door blocking your way. Don't try to open it or you will take 5 damage. Walk next to it, and Savant will contact the Commorb v2 to tell you about the strange markings on the door. Scan the Commorb for her. She can't read them and suggests you take them to Jorral to try to find out what they mean. Pick up the dead sea slug off the floor before leaving and head to Jorral's house, which is located at an outpost just north-west of West Ardougne.

Note: Check your quest log whether it has been updated and requires you to go to Jorral; otherwise, open the doors (taking 5 damage) and a replay of your communication with Savant will be played. You can now proceed to Jorral.

Jorral is found in the outpost due north of West Ardougne.

Make sure you have a free inventory slot, as you will not get the notes if your inventory is full. Now, go talk to Jorral, who is at his Outpost (you can use the Necklace of Passage to teleport here). After some coaching from Savant on what to say, Jorral will translate the message for you. When you leave the building, Savant will contact you again to let you know just what this new revelation entails.

Head back to Witchaven, and report in with O'Niall. He'll suggest you go talk to the priest and see if he knows anything about how to open the door. As you approach the church, you'll see a brief cutscene of the mayor leaving the church. When you go in, the priest will be looking rather ill and acting strangely. Ask him about the door, and he'll tell you that he has a book that might be of use, but the three most important pages are missing.

For the first one, go to the mayor's house and look in his desk. The second one will be given to you by Ezekial Lovecraft, the owner of the Fishing store, when you talk to him. For the last one, talk to O'Niall again. He too has taken the same look as the rest of the villagers. He'll give you the last page, but unfortunately, it has been ripped into three pieces.

Try to use swamp paste on any of the fragments to glue the page back together, but Savant stops you. The oily tar would ruin the ancient parchment, she warns. Instead, she advises, to make sticky glue from a rendered slug, and she mentions that it can only be done by someone who is renowned in seafood cooking. 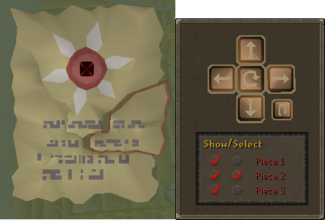 The solution of the puzzle.

Travel to the Fishing Platform by talking to Jeb, who is next to Holgart. There, talk to Bailey in the small room on the south-west corner of the platform. Hand him the dead slug you picked up earlier from the shrine, and in a few seconds, he gives you the sea slug glue you need. Finally, use the glue on the fragments, and a puzzle will pop up.

You can move the three pieces around using the buttons on the side, turn them, and even flip them over. The easiest way to tell if you've got them all on the right side is that one side is lighter than the other. You can look at the solution on the right side of this page. After you put the pieces in their correct place, the puzzle will close automatically.

Items needed: Commorb, 3 pages from previous section, at least 5 rune or pure essence (it is recommended to bring more), chisel, tiaras/talismans for entering the air, water, fire, earth, and Mind Altars (not necessary if travelling through the Abyss or using Guardians of the Rift)

Recommended: Fast travel methods to either the five altars, the Abyss, or Guardians of the Rift.

For the next part, you'll need a chisel and at least five rune or pure essence, although it is advised to bring as many as you can hold. Craft the runes into the shapes of air, water, fire, earth, and mind by right-clicking the pages, selecting the options to make the runes. It is likely to fail a few times and break some runes. The odds of success are 43% at level 1 Runecrafting and 99% at level 99 Runecrafting, scaling linearly[1]. Do not use the chisel on the essence, or you'll get fragments. When finished, you need to use the shapes' on their respective altars (e.g. earth on the Earth Altar). It is possible to fail empowering the runes, in which case they will also break. Thus, keep your pages, chisel and spare essence handy as you make your way to the various altars. You can travel through the Abyss, Guardians of the Rift, or use a talisman or tiara on the following mysterious ruins;

Now, head back to Witchaven to open the mysterious door, and prepare for a fight. Go down with the Commorb v2 into the shrine in Witchaven again, and use your newly created runes on the door in any order. It is revealed that Mayor Hobb tricked you into opening the door, sealed by the White Knights, so Mother Mallum could escape.

You'll have to fight a level 62 Slug Prince. Its attacks drain your Prayer by the amount of damage dealt. You can only use Melee to damage it. 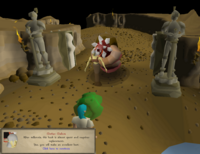 Once you kill it, you'll be treated to another cinematic introducing you to Mother Mallum. The situation gets too hot to handle, and Savant will teleport you to Falador Park. Talk with Sir Tiffy Cashien again to finish the quest. 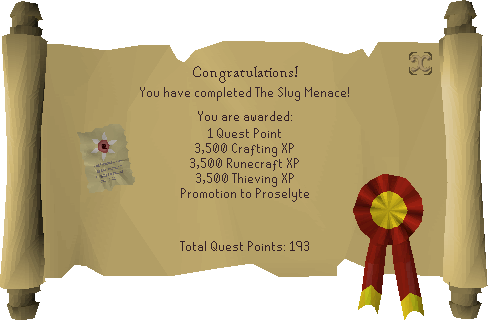