The Tourist Trap is a quest set in the Kharidian Desert. The quest involves an undercover rescue operation into a slave camp to save an Al Kharidian woman's daughter.

{"requirements":"* <span class=\"scp\" data-skill=\"Fletching\" data-level=\"10\">[[File:Fletching icon.png|21x21px|link=Fletching|alt=Fletching]] 10 [[Fletching]]</span> <sup>(<span title=\"This requirement is boostable\" style=\"cursor:help; text-decoration: underline dotted;\">boostable</span>)</sup>\n* <span class=\"scp\" data-skill=\"Smithing\" data-level=\"20\">[[File:Smithing icon.png|21x21px|link=Smithing|alt=Smithing]] 20 [[Smithing]]</span> <sup>(<span title=\"This requirement is boostable\" style=\"cursor:help; text-decoration: underline dotted;\">boostable</span>)</sup>\n* The ability to defeat a level 47 enemy","desc":"South of Al Kharid a new desert pass has opened up, leading to the dangers of the Kharid desert.\nEquip your desert garb and make sure your waterskin is full before heading off into the trackless dunes in search of desert adventure.","difficulty":"Intermediate","kills":"* [[Mercenary Captain]] ''(level 47)''","name":"The Tourist Trap","start":"[[Irena]], the woman crying on the [[Kharidian Desert]] side of the [[Shantay Pass]] south of [[Al Kharid]].","length":"Medium","ironman":"[[File:Ultimate ironman chat badge.png]] You need to unequip your armour and weapons, and require two empty slots in addition to that. Failing dialogue will require 15 empty inventory spaces.","items":"'''Note that all of the required items can be bought from [[Shantay]] at the [[Shantay Pass]].'''\n* Full [[Desert clothing]] ([[Desert shirt|shirt]], [[Desert robe|robe]] and [[Desert boots|boots]] required). You '''will''' lose them. (Black desert robe and Black desert shirt does not work)\n* 1-3 [[Bronze bar]]s (can be lost while experimenting)\n* A [[hammer]]\n* 30-50 [[feather]]s\n* Means to enter the desert. (Such as the [[Shantay pass (item)|Shantay pass]], [[Desert amulet 2]], [[Teleport tablet]] or [[Teleport scrolls|scrolls]], [[Fairy rings]] or the [[Pharaoh's sceptre]])"} 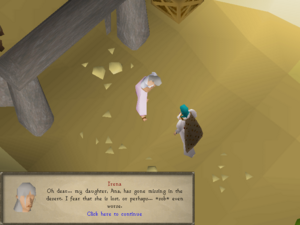 Talk to Irena just outside the Shantay Pass. Ask her about her daughter until you offer to find her. After starting, unequip all of your metal armour, and put on your desert clothing. Since you're in the hot part of the desert, your character will grow thirsty and take a drink of water as time passes. Desert clothing will make your water last longer, and you can refill your waterskins by cutting cacti found around the desert with a knife or a slash weapon.

Bedabin Camp is directly west of the Desert Mining Camp.

From the Shantay Pass, go south to find some footprints. Follow them until you reach some Mercenaries guarding the gate to the Desert Mining Camp. Search the gate and use the "watch" option on the mercenary captain, then talk to him. Compliment him and agree to do him favours until he asks you to kill an infamous bandit leader. Say you can't do it. Then say funny a captain who can't fight on his own.

Do not attempt to kill the Captain before this if you are prompted by a text box asking if you are sure. Otherwise his guards will swarm you and you will be teleported further into the desert, with the guards taking all your water and dealing significant damage.

Kill the captain and take his metal key.

Note: A dwarf multicannon can be set up west of the gate and the mercenary captain can be lured to the edge of his roaming area where the cannon will be able to hit him.

Note: Unequip everything except your desert clothing after defeating the captain, and before entering the camp. Inside the mining camp, wear only your desert clothing. If you decided to go through the gate with your weapon equipped, you will be put in a cell. Simply bend the bars in the window, and climb out. Once you've climbed out, climb the rocks, then the cliff, and then the rocks once more to escape the camp. You can enter through the gate once more. You may also be sent away from the camp and have your waterskins taken from you. Warning: The waterskins are taken before some unskippable dialogue in which time heat damage can be queued, potentially killing players with low health from the fight after the dialogue finishes. 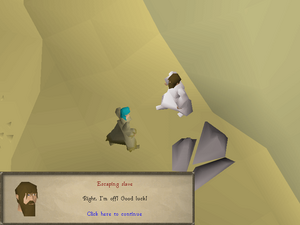 Trading clothing with a slave keen to escape.

Once inside the camp, go into the building to the north, and search the table with a Bowl of water on it. You will receive a Cell door key, which will save you time if you get caught in the upcoming sections; simply use the key on the prison door if this happens. You also can refill your waterskin from the bowl.

Exit the hut and run to the east wall by the rocks. Talk to the male slave. He will tell you that he's planning on making an escape. Tell him that it sounds interesting. Help him remove his handcuffs and switch his Slave robes for your Desert clothing (the Black desert robe and Black desert shirt do not work). Do not attempt to do this with a guard close by as you may be detained by the guards here and they will remove the Cell door key from your possession.

Warning: Once you have entered the underground mine area, do not remove your clothes around the guards or mention the key, or you will be jailed and forced to mine 15 rocks to be freed, to be handed in all at once. You will lose anything you dropped to make space. Teleporting out is possible. If the dialogue begins where guards have noticed you are not in the right outfit, logging out immediately, then logging back in and equipping the correct outfit will prevent you from being taken. Additionally, the guards may attack you while wearing the slave robes instead of jailing you. Be sure to keep an eye on all guards around you while in the Desert Mining Camp.

Wearing the slave robes, enter the mine and follow the path until you come to a guarded cave opening (to save time you can click on the end of the cave directly below you on the minimap, to auto-run through the cave). Talk to a guard and tell him you want to mine in a new area, and he will request a 'Tenti' pineapple. Now you can either back track and exit the way you came into the mine through the large double doors and head west to the gate entrance. Unequip ALL pieces of your slave robes and leave the desert camp through the front gate, or return to fairy ring BIQ.

Warning: You will be jailed if you don't unequip your slave robes before leaving the camp through the front gate OR if you exit the mine through the doors with them unequipped!

Alternatively, if you take off your slave clothes whilst still in the mine, you will be quickly taken to the jail, but you will have to kill the mercenary captain again. You can escape jail by bending the cell window, climbing out, climbing the rocks and cliff, and descending outside the camp.

Note: There is a Rowdy slave that may attack you while in the mine. You can trap the rowdy slave behind the rocks on the wall in order to talk to the guard.

Go west to the Bedabin Camp and talk to Al Shabim in the southern circular tent. He will agree to give you the pineapple if you get some weapon plans for him, and gives you a key.

Go back to the Desert Mining Camp. Again, ensure that you have no armour or weaponry equipped upon entry. Enter the building to the north. Climb up to the ladder to where the captain is and search the south-west bookcase to learn he has an interest in sailing. Try to open the chest and he will notice you, and you'll be given a number of options on how to distract him. 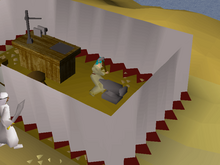 This will get him distracted enough for you to search the chest. After you have the plans, go back to the Bedabin Camp and show Al Shabim. He'll give you permission to use the anvil nearby. Enter the tent directly north of Al Shabim, near the magic carpets and use your bronze bars on the anvil to create some dart tips. Then add the feathers to make a dart (note that its possible to fail, so bring a few extra feathers). Take the dart back to Al Shabim and he will give you the pineapple you need.

Note: You can now make your own darts! 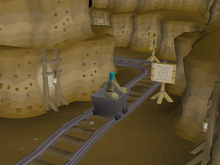 Riding the mine cart. Enjoy the ride!

Equip your Slave outfit and head back down into the mine and give the tenti pineapple to the guard who wanted it. He'll now let you inside. Walk further down into the mine until you find yourself in front of a mine cart. Nearby, search (not 'look in') the barrels until you can pick one up as you'll need one later. Then, get into the cart by searching it, and ride it to the other side.

Note: It is possible to fail this stunt and take 1-4 damage by banging your knee or falling off the edge of the minecart.

Go down the north-west path, to find Ana. Simply use the barrel on her and head back toward the mine cart; making sure not to drop her.

Note: If you engage in conversation with Ana the guards are listening so do not mention anything about the guards or having a key as you will be thrown in the mine to mine ore and your key will be taken from you. 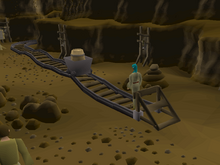 Putting Ana on the cart.

Put the Ana in a barrel into the mine cart and send it down the track before getting in and riding down to the other side after her. Search an empty barrel and you'll automatically find and retrieve the one that has Ana in it ('look-in' doesn't work).

Warning: If you attempt to exit the mine with Ana still in your inventory then the guards will discover her, jail you and you will need to start the Rescuing Ana section again.

Walk to the winch bucket, put the barrel on it, then the guard nearby will help you hoist it up. Whenever you get a chance, make sure to compliment the guard in some way to avoid being caught.

Head back to the surface again and go to the winch in the south-west corner (Do not take off your slave robes as you will be thrown in the underground cell and forced to mine 15 rocks). Operate it before searching the nearby barrel to retrieve Ana. Then, go put her in the cart nearby. Now, you need to talk to the cart driver. 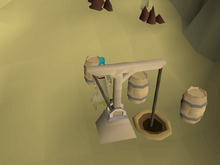 Operating the crane with Ana in the barrel.

In order to get out, tell the cart driver the following phrases:

Search the cart and get on it. Bribing him also works, but it costs 100 coins.

Head back to Irena, and she'll reward you for all your hard work. 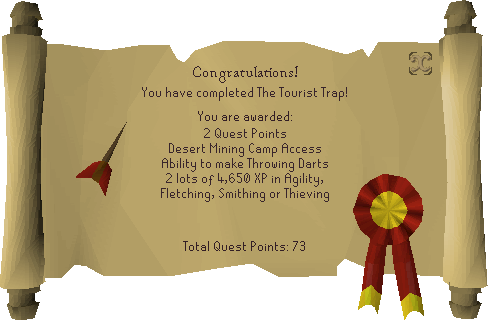 Completion of The Tourist Trap is required for the following: