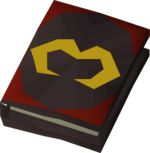 The turncloak can be found in upper floor of the Crombwick Manor, which is accessed through the Sisterhood Sanctuary.

The book depicts Phosani, the Justiciar of the Wolf, and her companions Insela and Otrava surrendering their squadron, pledging allegiance to Lord Drakan and betraying Saradomin during the God Wars.

The following text is transcluded from Transcript:The turncloak.

Where's our god now? The king has been taken and so the queen has no choice. She'll surrender the capital causing the fighting to stop, and the killing to begin. Those who resist will be enslaved, especially the pious - they taste the best, or so I've heard. I'll ask you again, where's our god now?

My word is law, very few question a justiciar - for we speak with the voice of Saradomin. I'll inform my squadron that he's abandoned us. We've blued our armour, but there'll be no need to dye our fabrics, for the war has stained them a dark crimson already.

At dusk we'll march on Drakans' host and bend the knee - my squadron will pay the price and I'll become a general to a god who provides.

I sense that some do not believe in this cause, some say the enemy won't take us in. I've but two loyal sisters left. Insela, our ballistics expert and Otrava, our squadrons healer. They'll stick with me until the end.

Woe to those who've yet to lose their faith, I've heard that the Lord of Vampyrium impales dissenters. I'll show him such devotion and obedience, he'll have no choice but to take us in. The dark times have only just begun, I'll make Saradomin rue the day he turned his back on us.

His-Dark-Self accepted our offering! My sisters and I have been tasked with clearing out the hamlets and leading the cattle right into the heart of his vampyre host. Our armour is black and our cloth crimson, but they still know a Justiciar when they see one and they know it would be heresy to defy me.

A small hermitage to the north east of the capital is our next target, while our master moves further south. As a trio, we move quickly. Soon Hallowvale will be a name forgotten in time, covered by the grand shadow of our new god.