From Old School RuneScape Wiki
Jump to navigation Jump to search
This article is about the boss. For the Slayer monster, see Smoke devil.
Not to be confused with Nuclear smoke devil.

It is the only monster to drop the Smoke battlestaff, Jar of smoke and the pet smoke devil. It drops the occult necklace at a higher rate than smoke devils do.

Unlike most NPCs, the Thermonuclear smoke devil is always able to walk through other monsters/players. This is to prevent players from safespotting the boss using the smoke devils found in its lair.

A dwarf multicannon cannot be used inside the boss room. If it is set up, the cannon will be destroyed (as in the lairs of the KBD and KQ).

Drop rates estimated based on 1,059,303 kills from the Drop Rate Project, unless otherwise cited.

The average Thermonuclear smoke devil kill is worth 22,560.62.

The average Thermonuclear smoke devil kill while on a Konar task is worth 24,657.81.

There is a 2/107 chance of rolling the gem drop table. 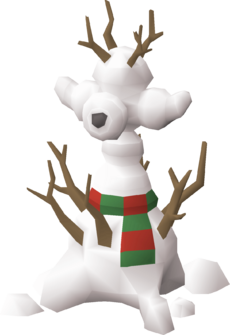 A player transformed into a Thermy snowman.