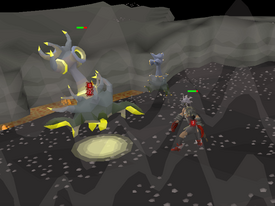 A player battles against the Thermonuclear smoke devil.

The thermonuclear smoke devil is a boss variant of the regular smoke devils, requiring 93 Slayer to kill. Similarly to Kraken, despite its high requirements, the boss fight is mechanically simple and kills are quite quick, reaching 60–100 kills per hour depending on gear and strategies used. 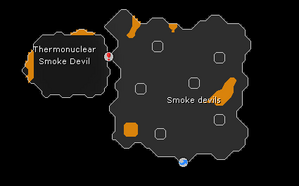 The thermonuclear smoke devil is located in a separated section of the Smoke Devil Dungeon, as seen on the image. The quickest way to get to this dungeon is via fairy rings:

If fairy rings are not unlocked, teleport to Castle Wars and run south-west of the building, where the entrance to the Smoke Devil Dungeon is.

Run north-west after entering the Smoke Devil Dungeon to find a crevice leading to the section with the thermonuclear smoke devil.

The thermonuclear smoke devil only attacks with a typeless magical ranged attack:

The thermonuclear smoke devil can be frozen by using the ice spells of the Ancient Magicks spellbook.

After the Redemption effect is triggered, the player will have to quickly restore their prayer points by drinking a dose of a prayer potion or super restore and reactivate the Redemption prayer.

Players with a Prayer level of 96 or higher are able to restore 24 hitpoints with the Redemption prayer. Since a prayer restore potion has four doses, each potion could potentially heal 96 hitpoints, which is significantly higher than the best healing regular food (which restores 22 hitpoints), albeit at a significantly higher cost compared to food.

Since the maximum hit of the thermonuclear smoke devil is 8, the player should always stay at at least 9 hitpoints while utilising the Redemption prayer method, to reliably survive all of the thermonuclear smoke devil's attacks. Therefore it is highly recommended to have a Hitpoints level of 90 or higher, to make sure the Redemption prayer always gets activated when the player gets damaged below 9 hitpoints.

A more advanced version of the walk-under method utilises the fact that NPCs do not move when the player they are targeting is underneath them if the player clicks on an item on the ground or an interactive object (producing a red 'X' when clicked). If an item, such as the ashes that the boss drops every kill, is under it or on the opposite side of the boss from the player, it is relatively easy to walk under the boss and attack on a constant rhythm. This works even with the left-click attack option on. This is easy to do if the item is under the boss' hitbox and not under its clickbox, or if the item is on the opposite side from where you are attacking; simply kill the first one as normal with the walk-under method, then drop the ashes in the south-west corner of the boss' hitbox where it normally spawns. If done correctly, after the next kill, more ashes will be dropped in the exact same tile and you do not have to drop more.

Similarly to the Abyssal Sire, the thermonuclear smoke devil is close to a fairy ring. As such, players can also utilise a similar method for killing the boss. A weapon that can deal very high special attack damage is recommended for this method; dragon claws are useful for this purpose. As the fight is expected to end very quickly, the player brings the best strength-boosting gear they can afford and dumps all specials on the boss, before killing it as normal.

After killing the boss, the player teleports to their house and uses the rejuvenation pool to restore lost health, prayer and special attack. This yields very high profit with low input cost, the only actual money lost being that from house tabs if not using the Construction cape and super combat potions. However, kill rates are significantly slower than killing it normally due to the simplicity of the boss fight and its 5 second respawn timer.