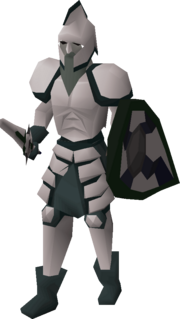 As the other monsters in the boss room are solid, the warrior is often stuck behind the boss or other Third Age monsters.