From Old School RuneScape Wiki
Jump to navigation Jump to search
The RuneScape Wiki also has an article on: rsw:Throne of Miscellania

Throne of Miscellania is a quest about the Fremennik island Miscellania. The king, Vargas, has unfortunately become a yeti, thus making him require a regent to rule his kingdom while he is unable to.

Take the longboat from Rellekka to Miscellania (largest one, same sailor from Fremennik Trials) or use the fairy ring code cip (if Fairytale II - Cure a Queen has been started) to arrive north of the castle. If you don't have flowers yet, you can buy them from the Flower Girl in the castle courtyard. If you need or forget anything, the bank in Etceteria is available for use.

Speak to King Vargas located upstairs in the castle (south-west) to begin the quest. He will agree to let you be ruler of the kingdom if you can marry either his daughter or son, make peace with Etceteria, and gain the support of the population.

Note: Be sure to use the items mentioned below on the [Princess/Prince] and do the emotes or [she/he] will continue to repeat "Good day".

Warning: Changing your gender twice at the Make-over mage (e.g. Female to male and back to female) prior to giving the prince or princess a ring, you will have to redo that section. If you have given them the ring, they will speak to you as if you are not engaged but it does not matter. 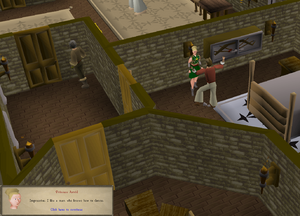 Impressing Princess Astrid with a dance.

Enter Princess Astrid's room, which is north of the throne room, and speak with the Princess of Miscellania. Start to tell her about your desire to become regent. She interrupts you to say she has many suitors. She will, however, give you a chance to impress her.

Speak to the princess a few times, and agree with whatever she says. Then, use the flowers on her. You can buy mixed flowers for 15 coins from the Flower Girl in the marketplace just outside the building from where the king presides. Now, use the Dance emote in her room.

Speak to her a few more times, responding with agreeable answers. Once she has nothing left for you to agree with, use a bow (No Comp Bows, Or Magic Bows) (the weapon, not the emote) on her.

Once she has nothing left for you to agree with, use the ring on her. She finally agrees to marry you. She says you two will have to put off the actual ceremony until you can find a priest, but you can tell her father of the marriage.

Enter Prince Brand's room, which is south of the throne room, and speak with the Prince of Miscellania. Start to tell him about your goal of becoming ruler of the kingdom. He interrupts you and asks why he would be interested in a "crass adventurer like yourself?" He will, however, give you a chance to impress him.

Continue to talk with the prince, selecting the most flattering answers, until he asks if you would like to hear his poem. Tell him, of course, you would love to. After he recites his poem, select "Be still, my heart" and use the Clap or Cheer emote (Must be standing inside the room, and not the doorway for both emotes). He thanks you. Use your flowers on him to continue the dialogue. When he asks if they are for him, say, "Yes".

Continue to talk with the prince (he will ask you your name), providing him with flattering answers, until he asks if you would like to hear his saga. You wonder if you have the time to hear a whole saga, but he launches into it anyway. Continue to flatter and talk with the prince, give him the cake or chocolate cake, and tell him it is for him (be careful not to eat it).

You ask the prince to marry you, and he says "Yes!" He says that you two love birds will have to put off the actual ceremony until you can find a priest but you can tell his father he has agreed to marry you.

Talk with Advisor Ghrim, who is off to the side behind the king, and ask him how to make peace with Etceteria. He tells you to talk with Queen Sigrid of Etceteria. Head east, cross the bridge over into Etceteria, enter the large building in the east side of town, go upstairs, and enter the centre room, where you will find Queen Sigrid.

Speak to Queen Sigrid. After you tell her you have been sent by King Vargas to negotiate a treaty, she says she will agree to a peace deal if King Vargas will accept Etceteria officially as a sovereign nation. Return to Vargas, and tell him what the queen said. He says he will recognise her country if she changes Etceteria's national anthem. 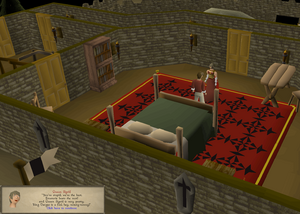 Sigrid singing the current version of the Etceterian anthem.

Dash back to Queen Sigrid, and speak with her. Although she, at first, says it is a great anthem and that she composed it herself, she eventually agrees but requests that you come up with a new anthem. Return to Miscellania, enter the room to the south of King Vargas's throne room, and speak to Prince Brand. You tell him you need a new anthem, and he agrees to write you one immediately. It is, however, terrible. He gives you the awful anthem.

Enter the throne room next door, and talk to Advisor Ghrim about the anthem. You give the advisor the awful anthem, and he makes a few adjustments, turning it into a good anthem. Return to Queen Sigrid, and tell her you have a new anthem. She is pleased with her new anthem and hands you a treaty - which she has already signed - to be signed by King Vargas.

Take the treaty back to King Vargas, and tell him it is awaiting his signature. He says he cannot sign it with an ordinary pen. He needs a pen large enough for him to hold. Head to the northern shore of Miscellania, to the east of the mining icon, where you will find Derrik. He is in the house with the anvil. Talk to Derrik, and tell him you have a strange request. He says he can make a giant nib if you have an iron bar.

Give him your iron bar, and he gives you the giant nib. Use the nib on logs, and you end up with a giant pen. There are a few evergreens around the islands, so you don't need to go to the mainland if you have not brought logs. Take the giant pen to King Vargas, who then signs the treaty, bringing an end to the rivalry between the two kingdoms.

Note: The end time of the Throne of Miscellania quest determines the time at which your Kingdom will lose favour, take money from the coffer and produce resources. Consider finishing the quest at a time which is convenient for this.

After the treaty, you must get the support of the people in order to be the new ruler. You will need the support of 75% of Miscellania to finish the quest. You will start off with 25% (you will start with less if you killed any of the villagers or stole from the stalls) and you gain 0.33% with each action you do.

You can check your approval rating by speaking with Advisor Ghrim. You won't be able to check your progress with the local laborers until you finish the quest - they will ask, "Who are you?"

If your aim is 100% approval rating, you can continue working until the person receiving the items stops you. (Your chat box also tells you that you've completed a hard task for your Fremennik achievement diaries.)

Talk to Advisor Ghrim to keep track of how much support you have. After you have 75% of the public support, talk to King Vargas and congratulations! You have completed Throne of Miscellania! 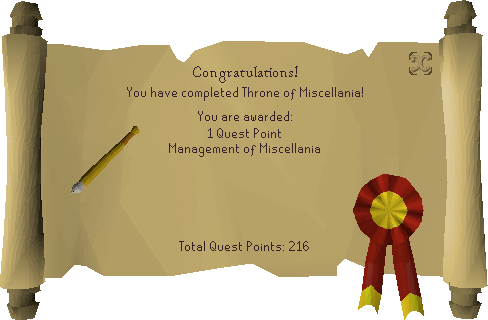 Completion of Throne of Miscellania is required for the following: