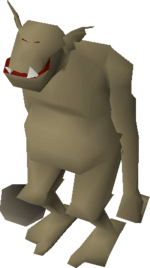 A Thrower Troll is a troll that attacks with ranged. They are relatively annoying monsters that throw rocks at passing adventurers, regardless of being engaged in combat or not. They are rarely ever on their own, preferring to be together in groups. Unlike most other monsters, the thrower troll's attacks are always successful hits. As they are found in multi-way areas, being attacked by three or more thrower trolls at once can be deadly.

Equipping a fremennik round shield will reduce their maximum hit to 2.

The Thrower Trolls on Death Plateau's north side can be lured and safespotted using melee. For example, if a player targets the easternmost thrower, hits it once and then runs south-east, the thrower will throw once and then follow. Simply run back to the thrower when it reaches 5-9 tiles away from its spawn and it will be unable to fight back in melee. Due to troll's high range and magic resistance, this is an excellent way for a lower level slayers to complete a slayer task without much food.

The average Thrower Troll kill is worth 960.7.

There is a 19/128 chance of rolling the common seed drop table.