From Old School RuneScape Wiki
Jump to navigation Jump to search
The RuneScape Wiki also has an article on: rsw:Clean toadflax
This article is about the cleaned herb. For the grimy herb, see Grimy toadflax. 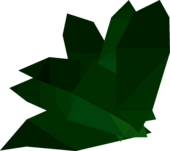 Toadflax is a low level herb, requiring level 30 Herblore to clean. It can be acquired from Random events or grown with a Farming level of 38, by planting toadflax seeds in herb patches. It can also be acquired by trading in 3 tickets from the Brimhaven Agility Arena or as a reward from Temple Trekking. It is used to make agility potions, and most commonly, Saradomin brews. To create a potion, you need to add the cleaned herb to a vial of water to create a toadflax potion (unf), and then add the secondary ingredient.

Using Toadflax in the coconut milk based Antidote+ potion is often considered a waste, as Antidote++ is highly more preferred by PvM'ers, whereas the Antidote+ is not usually in demand or used often. However, Antidote+ can be a viable and cheaper option in certain situations, such as fending off poison while training Ranged or Magic at the Skeletal Monkeys on Ape Atoll. Ironmen may also prefer to create Antidote+ until they reach a high enough level to create its more potent counterpart.

According to the book Gielinor's flora - herbs, the flowers of a toadflax plant are often believed to resemble a toad's mouth, which is likely where it got the name. In addition, it is often mistaken for snapdragon and is widespread in rural spots.