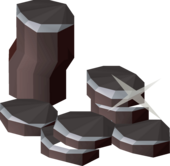 TokKul is the currency of Mor Ul Rek. It is made from obsidian and cannot be created by players. As it is a currency, TokKul dropped by monsters can be automatically collected if the player is wearing a ring of wealth.

TokKul is made out of the corpses of the TzHaar, as stated in the 17th Postbag from the Hedge letter. When asked why players cannot trade TokKul, TzHaar-Hur-Lek responded:

There are currently eight ways to get TokKul:

TokKul can be spent in the following shops:

Wearing Karamja gloves 1 or higher will give a player a discount. For instance, uncut onyx will cost 260,000 TokKul instead of 300,000.

When selling chaos runes, each piece of TokKul costs 8 coins.

When buying uncut onyx (with the discount), each piece is worth 8.16 coins.