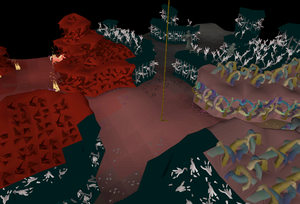 Misthalin✓? (edit)Varies? (edit)? (edit)Fear and Loathing, Method of Madness, No Way Out, Wrath and Ruin 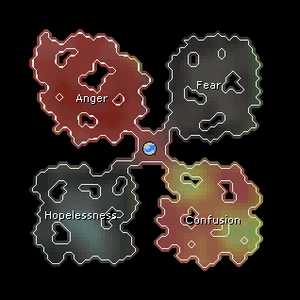 Tolna's rift can be accessed after completing A Soul's Bane. It is located east of Varrock and west of Paterdomus.

After completing the quest, you can attack the monsters within the dungeon for combat training experience. The monsters don't drop any items.

There are four major areas of the dungeon each consisting of quite strange monsters.

This room contains monsters suitable for level 40s-50s to train on. Monsters are level 47 and have 50 hitpoints.

This room contains Fear reapers and is only recommended for those with combat levels in at least the high 40s. Fear reapers are level 55.

This room contains level 63 Confusion beasts. They can no longer poison as they could during the quest.

At level 71, the Hopeless Creatures are the strongest in the dungeon.

The first thing any adventurer will notice upon entering the dungeon after completion of the quest is that they will enter a lobby type area, allowing them to go into any of the rooms. After finishing the quest, the creatures will be noticeably stronger. Also, there are no bosses.