Tome of the moon 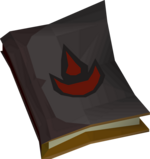 The tome of the moon is a book obtained during the miniquest In Search of Knowledge by searching the Temple Library bookshelves within the Forthos Dungeon. Initially empty, players must fill four Tattered moon pages that are received as drops from monsters within the dungeon.

The tome contains the teachings of Ranul, the god of the moon.

If lost, it can be reclaimed from the north-eastern bookshelves in the Temple Library, or from a bookcase within a player-owned house if the tome has been fully restored.

The following text is transcluded from Transcript:Tome of the moon.
Origin of Ranul

From the dark of the night, with the absence of light, Ranul came into being. Ranul bestows to those of us who are worthy, both his guidance and his wisdom. While Ralos celebrates life, we instead turn to Ranul, who teaches us to reflect upon life and the importance of death.

After life begins, the only other significant event is death, however death should not be feared, instead it should be both embraced and respected. Death shapes us and those around us as it is the final act of our lives, the final chapter of ones book.

As followers of Ranul it is our duty to guide others in embracing death. To make sure that the life they lived is celebrated and the memories left behind impactful and meaningful to future generations. To ensure that those who are dead are respected and that their last rites are observed, we must treat them in death as they were in life and as we too would expect to be treated ourselves once we pass.

Following Ranul pt.2
Ranul brings light to the darkness and reveals the secrets that were hidden within. Ranul teaches us that we must explore and uncover the mysteries of the world. To present the knowledge that we find to others but only as we see fit as we should not reveal secrets that would cause harm to others. While the followers of Ralos speak with confidence and decisiveness, they are often reckless and impulsive. It is our duty to play the other side of the coin and question the reason and direction for their actions so as to predict and prevent the consequences of them.