Tome of the sun 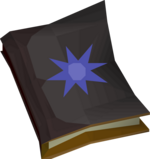 The tome of the sun is a book obtained during the miniquest In Search of Knowledge by searching the Temple Library bookshelves within the Forthos Dungeon. Initially empty, players must fill four Tattered sun pages that are received as drops from monsters within the dungeon.

The tome contains the teachings of Ralos, the god of the sun.

If lost, it can be reclaimed from the south-eastern bookshelves in the Temple Library, or from a bookcase within a player-owned house if the tome has been fully restored.

The following text is transcluded from Transcript:Tome of the sun.
Origin of Ralos

The world was nothing and began when Ralos came into being. With a burst of glorious energy which provides us with heat, light and from this, life. The power of the sun is rivaled by none. We are blessed to receive it's glory during the day and we lament that we are not worthy during the night. Praise the sun.

We must strive to be like Ralos during our lives. To be bold, honest, bright and brimming with positive energy. To seize opportunities, to regret not the past and to live life to the fullest. To fully commit ourselves to our goals during the daylight hours and then recuperate our lost energy during the night.

To emulate Ralos is to spread your own positive energy to as many people as possible. To provide them with sustenance, support and warmth both physically and emotionally. Ralos does so without regard for who they are or what they believe in without discrimination and as should we.

Following Ralos pt.2
As followers of Ralos we must strive to work against those who would consume the world in darkness, those who would spread cold and negative emotions to others and harm their fellow man for to do so is to become less human. However, do not hate your enemy, lest hatred becomes you, instead take pity on those that cannot see the light and do your best to guide them towards it.