Tome of the temple 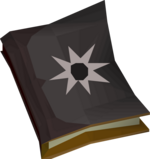 The tome of the temple is a book obtained during the miniquest In Search of Knowledge by searching the Temple Library bookshelves within the Forthos Dungeon. Initially empty, players must fill four pages that are received as drops from monsters within the dungeon.

The tome details the various features of the Forthos Dungeon, referred to in the tome as the Temple to Ranul/Ralos, and their original uses. The last page of the tome contains an entry by a follower of Ranul, whose followers have become corrupted and fanatical after meeting a dark wizard, who is either Xeric or one of his followers; it is purposely left open to interpretation.

If lost, it can be reclaimed from the southwestern bookshelves in the Temple Library, or from a bookcase within a player-owned house if the tome has been fully restored.

The following text is transcluded from Transcript:Tome of the temple.
Ritual Circle

The first room upon entering into the temple. A raised monolith with a joined symbol representing the union of both Ralos and Ranul. This monolith is used by both religions for delivering sermons and to preach about the practices of the religion. Meetings are held at the rise and fall of the sun/moon to celebrate their arrival and to pray for their return when they have left.

A sacred tomb used to lay to rest the followers of either religion once they have passed, although common practice for followers of Ralos is to be cremated on the Sacrificial Burner. The care of this room is the responsibility of the followers of Ranul but anyone may visit and pay respects to the fallen worshipers whenever they wish to.

Used to store religious texts and information considered valuable to both the worshipers of Ralos and Ranul. The care of this room is the responsibility of the followers of Ranul.

Altar of the Sun

A sacred altar used by followers of Ralos for praying directly to Ralos, this altar only works for those who Ralos deems worthy enough to receive his blessing.

Crypt of the Moon

A crypt used by followers of Ranul to bury their significant leaders. Contains a stone relief depicting a vision of both Ralos and Ranul.

A room containing a religious structure dedicated to Ralos which is used to cremate the bones of fallen red dragons in order to gain his favour. Members of Ralos also use this to cremate fellow worshipers as doing so will unite with them with Ralos in death.

To anyone out there! I don't know... what should I do? They're insane! Ralos has fled to Varlamore in the south, the followers of Ranul have become too powerful. I tried to warn them against meeting with the dark wizard but they wouldn't listen! I can already feel it, we've been corrupted and my friends are becoming more fanatical and straying further from Ranul, corrupting his teachings and trying to force premature death onto others. I can feel it too, part of me is slipping away slowly... Ranul, please forgive me.