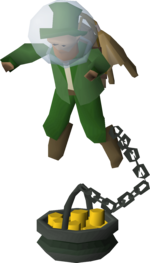 All Tool Leprechauns can carry various Farming tools for you and you can retrieve them from any Leprechaun:

Noted versions of these items can be stored as long as there is space available. "Right-click" the item in storage to withdraw as a note.

The Tool Leprechaun will note any items used on him that have been collected (or are collected) from Farming, including clean or grimy herbs as well as saplings. This is useful for inventory management when running between different farming locations.

The tool leprechaun will not note the following items: