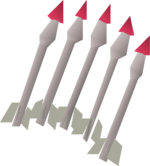 Enchanted topaz bolts have a 4% chance of triggering the Down to Earth effect. This will lower the target's Magic by 1 level. The bolt effect can only be triggered while fighting other players.

If the player has completed the Hard Kandarin Diary, there is a 10% increase (bringing it to 4.4%) chance of the likelihood that the special effect of an enchanted bolt will occur. This effect is always active, regardless of whether the headgear is equipped.