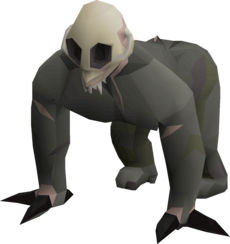 Tortured gorillas share similar mechanics to their demonic counterparts - the main difference being the lack of Protection prayers, and also they will change attack styles after four missed attacks, rather than three.

Note that unlike their stronger counterpart demonic gorillas, tortured gorillas are not considered black demons for the purposes of a Slayer task, although they are considered monkeys.

There is a 5/5000 chance of rolling the uniques sub-table.