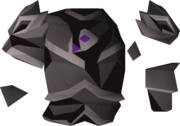 The Torva platebody is part of the Torva armour set, requiring 80 Defence to wear. The platebody boasts the highest strength bonus of any body slot equipment, being 2 higher than the Bandos chestplate, Inquisitor's hauberk, and fighter torso. As a Zarosian-aligned item, Torva armour will give Zarosian protection within the God Wars Dungeon.

The platebody is created by combining a damaged Torva platebody, obtained as a drop from Nex, with two Bandosian components. This process requires level 90 Smithing, and is not reversible.

Torva armour was one of the original rewards from Nex upon her release in RuneScape. Compared to Old School RuneScape's version of the Torva platebody, the original had several differences: