The Tower of Life is a tower south of Ardougne and is home to alchemy and hybridisation of various animals. There are four floors above ground and a basement dungeon that contains the Creature Creation activity. During the quest of the same name, you have to build several parts of the tower, as the builders refused to.

The tower features prominently in the Tower of Life quest. In the quest, you build several parts of the tower for the alchemists, since the builders refused to. The alchemists, who turn out to be callous and cruel, later flee the area when you cure and free their hybrid victim, the Homunculus.

After the quest, you gain access to the basement dungeon, where the Homunculus now resides and where you can play Creature Creation.

The Tower of Life is south of East Ardougne. Besides walking, the tower can be reached by three teleport methods:

The closest bank without using teleportation is the one south of the marketplace in East Ardougne. (Note that players do not have to go through the Ardougne Zoo using this route.) If players can use fairy rings, then the bank in Zanaris is closer. To return to the Tower of Life, the Ardougne cloak teleport to the monastery and a direct east run is faster return. 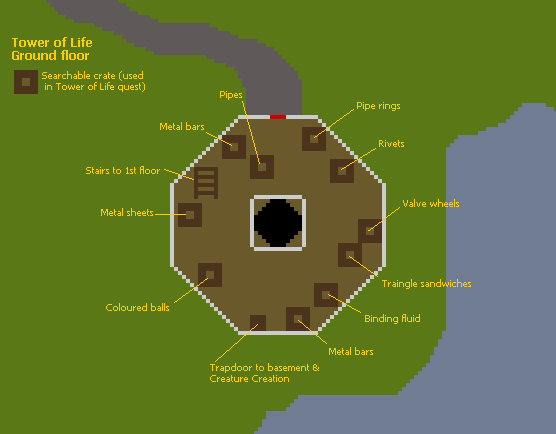 The ground floor[UK]1st floor[US] contains many searchable crates. Most contain items of use in the Tower of Life quest. One contains Triangle sandwiches. After the quest, the crates can still be searched for components of the builder's costume.

The 1st floor[UK]2nd floor[US] is used during the quest but has no use thereafter.

The 2nd floor[UK]3rd floor[US] is used during the quest but has no use thereafter.

The 3rd floor[UK]4th floor[US] is used during the quest but has no use thereafter. The tower is open on its southern wall here, with a barricade blocking access to the outside.

The dungeon can be entered after you complete the quest. Talk to the Homunculus in the northern part of the dungeon to learn how to play the Creature Creation activity. The dungeon contains six altars, or symbols of life, which are used in the activity.

The northern part of the dungeon contains a "magic well". Water from this well presumably is magical and is what flows through the many pipes and altars in the tower.

The centre of the dungeon contains the equipment the alchemists presumably used to create the Homunculus. There are experiment cabinets, experiment tables, shackle tables, retorts, and cages here. All currently have no use.

The "Weird" room in the centre along the north wall of dungeon has no known function. It seems likely to have some connection to the magic well, for blue, water-coloured squares glow in the floor as you walk in the room. When you leave the room, your character says "That was weird".

The tower contains no attackable monsters, except the hybrid monsters that players can make when playing Creature Creation.