The Tower of Voices is a large tower found in the centre of Prifddinas, and is named as such because in the Tower, it is said that the elves can speak directly to one of the fragments of their goddess, Seren, who chose to shatter herself rather than be forced to leave Gielinor when the Edicts of Guthix were put in place following the God Wars. The tower, formed from pure crystal, is the most important part of elven society.

During the Fourth Age, the Iorwerth Clan betrayed the other Elven Clans, conquering Prifddinas and denying the other seven clans access to the tower. During Song of the Elves, the tower, along with the rest of the city, is restored. 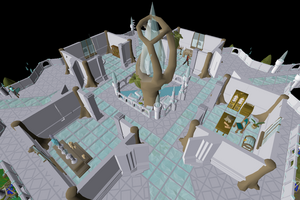 The upper level of the Tower of Voices.

The following NPCs can be found in the Tower of Voices, as well as upstairs: