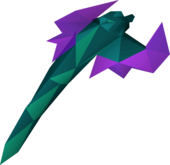 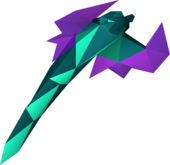 The toxic blowpipe is a two-handed dart weapon that requires 75 Ranged to wield. It is made by using a chisel on a tanzanite fang, requiring 53 Fletching. Players using the blowpipe have a 25% chance of inflicting venom on their opponent. However, if the opponent is an NPC and the serpentine helm is worn in conjunction with the blowpipe, there is a 100% chance of envenoming them.

Players can dismantle an uncharged blowpipe to receive 20,000 Zulrah's scales, resulting in a loss of −363,663 coins.

Players can toggle whether picked up ammunition is automatically reloaded into the blowpipe or remains in the inventory by talking to the Ranged combat tutor.

The toxic blowpipe is charged with Zulrah's scales; it cannot be wielded if it is uncharged, except when fully degraded while equipped. It uses unpoisoned darts as ammunition, and can hold up to 16,383 scales and 16,383 darts, costing 3,735,324 to fully charge. The blowpipe has a 1/3 chance to not use scales when firing, so on average 2 scales are used for every 3 shots fired. A fully charged blowpipe lasts 8 hours and 12 minutes of non-stop combat with rapid attack style, or 12 hours and 17 minutes with accurate style.

At the current price, it would cost 150.48 per shot, excluding the cost of darts. When charged with scales, the blowpipe has a Ranged attack of 30 and a Ranged strength of 20. These bonuses stack with the Ranged Strength of its ammunition. For example, using dragon darts on the charged blowpipe will increase its Ranged strength to +55.

Cost of use per hour[edit | edit source]

When using the rapid attack style on the toxic blowpipe, up to 3,000 darts may be fired per hour, which means up to 2,000 Zulrah's scales are used per hour. This makes the base cost per hour 456,000.

These values are for continuous usage and assume use of Ava's assembler.

If you are charging your blowpipe you can use the below information to know exactly how many darts and scales to purchase.

The toxic blowpipe has a special attack, Toxic Siphon, which increases accuracy by 100% and damage by 50%, while healing the user by half of the damage dealt (rounded down). This consumes 50% of the player's special attack energy.

Similar to the Saradomin godsword special attack, it will heal the player based on what they would have hit if the target dies from the special attack; for example, if the hit was calculated to deal 20 damage and the target only has 5 Hitpoints, it will heal the player by 10 Hitpoints. It also heals based on the damage dealt before calculating damage reduction for certain monsters, such as Vorkath during its acid phase (where it will take 50% reduced damage) or kurasks that have 100% damage resistance to most weaponry.