Toxic staff of the dead 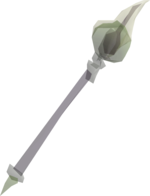 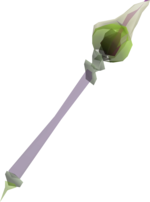 The toxic staff of the dead is a bladed staff made by using a magic fang on a staff of the dead, requiring 59 Crafting to do so. This process is reversible, provided that the staff is uncharged. It also requires 75 Attack and 75 Magic to wield.

Aside from increased stats, the toxic staff shares the same features as the regular staff of the dead, with one extra benefit; players using combat spells when wielding the staff have a 25% chance of inflicting venom on their opponent. However, if the opponent is an NPC and the serpentine helm is worn in conjunction with the staff, there is a 100% chance of envenoming them. The player cannot envenom opponents using the staff's melee attack. However, scales will still be consumed.

The staff is charged with Zulrah's scales, requiring 11,000 scales to fully charge it, costing 2,123,000. It is tradeable only when uncharged. The fang can be removed from the staff only when it is uncharged.

When charged, the fang increases the magic attack of the staff by +8 and allows players to inflict venom on their opponents.

If a player dies with the staff in PvP scenarios and it is not protected, any scales that were used to charge it will appear on the floor along with the uncharged staff.

The staff can be used to cast spells when it is uncharged as well.

A player using the toxic staff of the dead's special attack, Power of Death.

The effect lasts for one minute after using the special attack, but is immediately lost if players unequip the staff. In addition, the effect stacks with the PvP damage reduction effect of the Protect from Melee prayer.

The special attack cannot be used in the Duel Arena if magic is disabled.