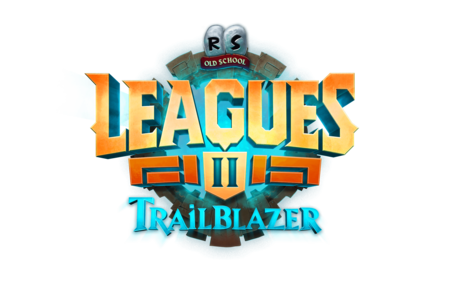 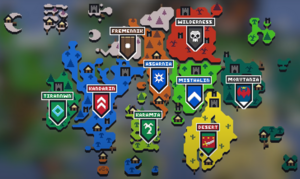 All Unlockable Areas in Leagues 2: Trailblazers.

Trailblazer jingle
The jingle that plays upon unlocking a new region.

Players will begin the league in Misthalin, unlocking subsequent regional areas by completing a fixed number of tasks. Karamja is unlockable for free, without any tasks being completed. They can only unlock another three areas in the game from a choice of Wilderness, Fremennik Isles, Asgarnia, Morytania, Kharidian Desert, Kandarin, and Tirannwn, therefore they will never be able to access the complete map and will have to choose wisely which areas to unlock.[3]

Every player will be an Ironman/Ironwoman, and come with the same restrictions as if playing in Ironman Mode, including not being able to trade with other players. Some shops will have increased stock and accelerated restock rates to account for the large numbers of Ironman players. Some bossing mechanics might be changed to allow for group bossing of non-instanced bosses.[4]

Players will start with a 5x accelerated experience rate, and begin with level 3 Herblore, 5 Runecraft, and level 10 Agility to enable Herblore training, Runecraft training, and the use of the Draynor Village Rooftop Course. Quests or diary tasks will be automatically unlocked if they require access to inaccessible areas, including Druidic Ritual and Lost City.

Trailblazer League introduces several new features, including the addition to passive relic unlocks, that were absent from the first league:

Tasks in the Trailblazer League allow players to earn league points and unlock relics that buff their character. Tasks will span five different difficulty levels: Easy, Medium, Hard, Elite, and Master. In the league, there will be hundreds of tasks to complete, ranging from reaching a certain level in a skill to killing certain bosses. Tasks are divided into area-specific and general tasks. Tasks will also prioritize performing unique actions rather than simply repeating an action "x" number of times.[7] There are presently over 962 tasks in the works for Trailblazer League; all currently planned tasks might not make it into the final game mode, and other tasks might be created by the time the league is released.[8]

Examples of area specific tasks include but are not limited to:

Trailblazer task complete
The jingle that plays upon completing a task.

Examples of general tasks include but are not limited to:

All unlockable areas are expected to have roughly the same number of obtainable points available in them.

A player unlocks a relic in the Trailblazer League.

Relics are powerful buffs that are unlocked with League Points. Upon completing the tutorial, players are presented with three Relics to choose from without the need for points. There are six tiers of relics in total, as well as an additional passive buff automatically unlocked at each tier. Each tier corresponds to a different aspect of the game: skilling, teleportation, combat, and utility.

Once players choose a Relic of a tier, they will be permanently unlocked, but cannot change their Relic selection for that tier.

Passive Effect: Items from some sources will be 2x as common.

Note: There are only two relics in Tier 4. Second Inventory was removed before release due to severe bugs found in playtesting.[10]

Passive Effect: Items from some sources will be 3x as common.

In addition to the league-to-league rewards, players can unlock several rewards for use in the main game. Several rewards have been polled and all proposed rewards have passed.[11] Rewards for Trailblazer League follow the colour palette of Beige, Brown, and Blue. Beige and Brown were selected as the league theme colours because they represent the dust and sand one might encounter when exploring a new land and were also inspired by the fictional explorer Indiana Jones.[12] Blue was selected as the highlight colour to represent the open skies an explorer would see as they travel.

At the end of the League players can claim a cosmetic wieldable trophy representing the tier they placed in. These trophies will not cost any Trailblazer League Reward Points. Bronze to Mithril trophies are shield slot items, while Adamant to Dragon trophies are two-handed items. The trophies have a unique emote that can be activated by right-clicking the trophy. All trophies are untradeable and can be claimed for free.

The points required are the official final points as listed in the Soul Wars And 20th Anniversary Event update.

The Trailblazer Graceful Set Ornament Kit is a potential reward costing 6000 league points. The set comes with six individual recolour kits, one for each item of graceful.[13]

The Trailblazer Dragon Skilling Tools Ornament Kit is a potential reward costing 1500 league points. A kit can be used on a dragon harpoon, dragon pickaxe, or a dragon axe to recolour it in the theme of the Trailblazer League. Each kit may only be used on one item at a time, but it may be removed from a dragon tool to be reused on a different tool or traded/sold. Although not currently planned, developers are considering whether the kit might also be used to recolour infernal harpoons, infernal pickaxes, and infernal axes.[14]

The Trailblazer Themed Banner is a potential reward costing 500 league points. The banner displays a Chevron and hangs from a pike modeled after the Dragon hasta.[15]

A home teleport animation is a potential reward costing 1000 league points. This animation shows the player character drawing cardinal directions on the ground in the order of North (N), East (E), West (W), and South (S), before being swept away in a storm of swirling sand. The letters for each direction are drawn pointing toward the direction of those cardinal directions in the game.

Although not a reward, a player-owned house league hall was polled alongside the Trailblazer League rewards. The league room will require 27 Construction to build and costs 15,000 GP. It will contain the following hotspots: