Hi, and welcome to this month's colourful collage of calamity! In this issue, we look carefully at how the lizards around the minimap got hired, ask Glough what he’s up to, give fashion tips to zombies, and much more besides. Thanks to many of you for popping by and saying “Woah, you weird freaky thing!” Not as freaky as those penguins, I assure you...especially that new one!

To The Two Lizards around the Minimap (aka Lefty and Righty),

I would like to thank you for guarding my minimap while traveling with me on my journey, from killing undefeatable foes to chomping on many pies!

My question to you is this, What are your names and how do you manage to stand still for such a prolonged period of time? (especially without beverages or pie).


Tooooon *gobbles down a pie*

There was a job advert that we saw in the Varrock Herald that stated ”Amazing opportunity for 2 trustworthy beings. Be gazed upon by millions and hold the world in your claws! No previous experience required, but good sense of direction a bonus”. As you can imagine, it wasn’t quite what we expected.

Hello, my name is Ape Aaron. I happen to have done the Rum Deal quest, and I totally tricked you out. But hey, I mean you only have one eye, and I feel kind of bad about having taken advantage of that fact. Do you have a lot of adventurers, or "questers", take advantage of you? If you do, I would be very willing to come over there and help you gaurd that island or maybe get you some chicken noodle soup or something? I'll even give you a...err...peg massage. Okay, maybe thats going a little too far...

So, how's the weather out there? It's storming where I am. So, umm, what do you think the 100th quest will be? I think it might either be another guild better than Legends, or maybe some sort of God Wars? Which god do you worship? A 50% god? Sorry, bad joke - no offence, I'm sure his 50% powers are awesome ( *muffled laughter* ). Anyway, I have to go and keep cooking my fish, cya later.

Firstly, ye'll be wantin' te keep yer hand off me peg, unless yer not too fond of yer fingers!

Second, I do get a lot of inconsiderate adventurin' types playing tricks on me, but fair play to them, if they have the savvy to put one over on such an awe-inspirin' lookout as me, then they deserve to get past. I'll have to pass on the offer of help, but if ye can find me some chicken soup I'd be much obliged to ye. 'Twould be better if ye could add a dash of 'rum' to it. Or ye just throw out the chicken bits and give me a bucket of that sweet, sweet, mind-dissolvin' 'rum'. Mmm...'rum'... As for the weather, it's not great. 'Tis woodworm season if ye catch me drift. I had heard some gossip about the 100th quest involvin' some fancy-dan livin' pirates, with their swanky pulses and posh non-droppin'-off-limbs. When I heard that, I just lost interest. Besides, it would just have distracted me from my watchin' and that would never do.

As fer my god, well I can't go into that. Last time I started talking about It, the Cap'n threatened te whittle me down to a flute, and dance a merry jig on the non-woody bits of me while playin' it. I don't see what the big deal is, but as he's wavin' a pencil sharpener at me right now I'll leave it there.

Whilst attempting to gather wool to complete my 40-something necklaces, I ran upon a strange sheep. It was you two penguins, masquerading as a sheep. Despite my most valiant efforts, I was unable to shear the wool from your backs. As such, I have the following questions:

I would be honored with your speedy reply. Thank you and good luck with whatever it is that would possess you to leave your homeland. 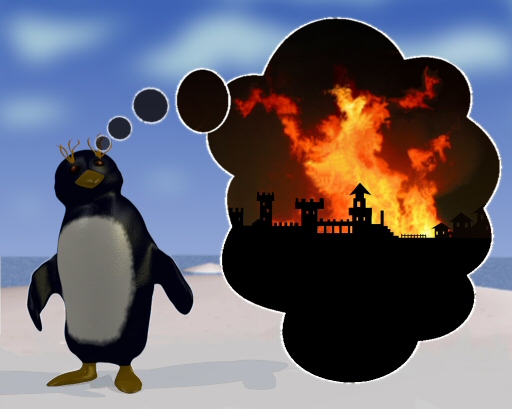 Ah yes, many fail the test of thinking I simply stand here saying 'Hello' all day. Can you think of anyone better to guard the gates of the guild than the Master himself? Besides this way I get to avoid all that horrible paperwork that goes with running this place. I get to leave it all to my Bursar.

The chickens you say? Hmm...interesting story here. A very short person with a black bag covering them clucked - well, I mean 'asked', of course - if we could set up a training arena for champion chickens. He paid well in feathers and cooked chicken, oddly. Said one thing as he left that struck me as strange: "Bwaakkk".

Anyway, must get on, people to greet and all that.

It has been a long time since we met, and I know that you are still angry with me, because I have ruined your plans to destroy humankind...twice. Well, I was busy training slayer with Chaeldar, when suddenly, I thought of you, then I was thinking if we can forgive each other and express our feelings each other in this letter, shall we? I think that this letter should probably end in the Grand Tree Jail, but maybe you have got away, or nobody have ever locked you into jail. If that is true, then where are you now?

Secondly, I was amazed when you called a black demon to kill me. How are you supposed to do that? First, there's only a black demon, but next time I met an even more fearsome jungle demon! They are both your pets, but where did you find them? And how come they let you pet them, when I can only pet cats and fish? And maybe you could teach me how to pet demons, would you? If yes, then maybe I can kill all the other people in the wilderness, and get all of their stuff! Then I start thinking, maybe you are something more than a gnome, like a Zamorakian gnome, or a great evil demon, which is the leader of all demons... Who, or what actually are you?

Lastly, I was wondering why you hate humans very much, and that you even want to start a war to exterminate all of us! Why? Why do you hate humans very much? Did we humans did anything wrong to you or someone close to you? If yes, I feel sorry for that, and I would do anything to help you with it. Or maybe that you are arrogant and you discriminate against us humans?

Please reply to this letter and espress what you feel. Till next time we meet, we will be enemies again.

P.P.S. */I WILL BE VERY VERY DISSAPOINTED IF YOU DISCRIMINATE AGAINST HUMANS, THAT'S NOT A GOOD THING (REALLY RUDE TO ME, CAUSE I'M ALSO A HUMAN), OR ELSE YOUR HEAD MIGHT BE SEPARATED FROM YOUR BODY BY MY SHARP BLADE./* Just joking.

Your enemy (although I tried to act very friendly in this letter),

Firstly, young human, no jail can hold me, for I have access to secrets forgotten by most gnomes. The magics I used to control those demons are mere trifles compared to what my masters can do. For gnome magics have been long underestimated - by you humans and the gnomes themselves. It is typical that a human might think of these creatures as pets or toys. They are tools to an end.

Am I 'more than a gnome'? No. I am a gnome. One of the original gnomes, and that is more than enough.

What are my plans? I have no plans, but my masters do, and I will do what is required of me. So be careful who you taunt young human - our plans are already in motion We are watching, we are listening and we are waiting. You may have defeated me twice, but we are patient. The Second Golden Age of the Gnomes will come soon enough...

I have recently been informed of your Armoured Tortoise Regiment, SIR! I wouldn't mind joining, SIR! I was wondering what the turtle shells were for, SIR! I have been informed by some high ranking officials, that there may be a use for them in the future, SIR!

I was also wondering if your interesting staff would be available for player use,SIR!

Your comrade in battle,
Hiimcharlie, SIR!

P.S. There's a rumour going around that you trod in some tortoise...you know... In other words, you smell! ...uh, SIR!

Did you know your name's an anagram for “chair mile hi”? Do you want to become a glider pilot, perhaps? Anyway...regarding your questions. Only gnomes can join my elite (soon to take over the battlefield) regiment as you humans often bring bad blood to the area. Killing innocent gnome children for their hats cannot be tolerated! Besides, I doubt Dobbie could carry 3 of you on his back! Tortoise shells have several uses, but we like to keep our gnomic inventions quiet for now, you never know when they might come in handy. Perhaps one day we can teach you, but not today. The staff you refer to is the “Tortoise Training Stick”, and is the only way we can wake them up!

Unless, of course, I’m being daft and you ARE a tortoise. If that’s the case, welcome on board!

Dear Zombies of the Underworld,

No offence (it might be all the rage in the land of the living dead) but your fashion sense is awful!

The 'Blue axe-wielding maniac' look was so last century, and crop-tops should never be worn next to green three-quarter lengths. Have you ever heard of personal stylists?

I can see the look you were trying to achive but someone of your height (and age) can never pull that off, a more effective combo would have been a white beret and flares. Modern, yet retro.

If you're ever stuck for ideas you could ask Trinny200 or Suz4n4 (they usually hang around Fally on world 12), but in the mean time I suggest you take a trip down to the Varrock clothes shop, they could sort you out with a temporary solution.

My question really has to be, what on earth were you thinking!? Surely you could see that you were out of touch with the fashion world? You better sort yourself out and explain yourself...or my dragon longsword and I are coming for you....

I don’t have the guts to change my outfit after all these years. I’d go to the clothes shop but I have no body to go with. Last time I went to Varrock the Barkeeper there told me there was a drink named after me! Frankly, I don’t think I want to visit anywhere that has a drink called Kevin. Weird.