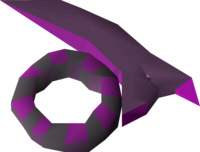 The Treasonous ring (i) is an upgraded version of the regular Treasonous ring. It can be imbued as a reward from the Nightmare Zone, costing 650,000 reward points, at Soul Wars for 260 Zeal Tokens, or by using a scroll of imbuing purchased from the Emir's Arena. Its stats are doubled compared to the treasonous ring.