This article contains all the possible clues when doing clue scrolls. For clues related to a specific clue scroll, see Treasure Trails/Full guide

Clue scrolls are generated primarily by monster drops, but also can be generated through Thieving, and as certain activity rewards. Each level of clue has a very different set of possible rewards and items, and hazards, so it is worth knowing what the player is in for.

NOTE: You are no longer required to own a sextant, watch, or chart in order to complete coordinate clues. Alongside the above mentioned items, for these types of clues, you will often need some additional tools:

Hard, elite, and master clues will often encounter various wizards and guardians that may prove difficult to fight. Therefore, the following items are recommended:

Having a high amount of quest points is beneficial when doing Treasure Trails. Many higher-level trails will lead a player into areas, which are locked by quests. If this is the case, the player must do the quest, up to where access to the area is granted, if they wish to complete their trail. If the player hasn't done the needed quest yet, but they have the requirements or are in a position to get them quickly, it is recommended that the player (trains and) does the quest, rather than getting rid of the clue scroll.

An anagram is a string of letters, which can be rearranged into another word or phrase. For example: orchestra is an anagram of carthorse.

The solution of an anagram is always the name of an NPC. Once the solution is found, the player can get their next clue by talking to that NPC. Often, when talking to an NPC, the player will receive a challenge scroll, puzzle box or light box that they must solve before receiving the next clue.

The anagrams in clue scrolls do not correspond with the number of spaces in a name; an anagram with no spaces may have an answer with a name corresponding with one or more spaces.

Ciphers are a method of encrypting information. In Old School RuneScape, ciphers are used as a step in a Treasure Trail. They use a Caesar Shift in order to encrypt an NPC's name.

Another way to solve Ceaser ciphers is by brute-forcing them, i.e. to try every possible decryption. This is hard to do by hand, but easy with programming. The following program will print all 26 possibilites, of which only one of them will decrypt to a meaningful phrase.

This prints the following table:

where the last decrypted text is the one we want.

During a Treasure Trail, a coordinate clue is a clue scroll that contains a set of coordinates. Much like the real-world longitude & latitude geographic coordinate system, coordinates in RuneScape indicate a precise point somewhere on the surface where the next clue scroll, or potentially the treasure casket, is buried. Coordinates are presented in the following format:

In RuneScape, one square of space is equivalent to 1.875 minutes.

Although a chart, sextant and watch may be used to determine one's present coordinates, players only need a spade in their inventory to dig up the clue.

On hard Treasure Trails, digging on the correct spot will cause a level 108 Saradomin wizard to appear, which must be defeated before the next clue scroll or the treasure casket may be dug up. If the coordinates are located in the Wilderness, a weaker level 65 Zamorak wizard will appear instead, which must also be defeated in order to dig up the next clue scroll or the treasure casket. Saradomin wizards are poisonous and use both Melee, using a Dragon dagger (p++), and the Magic spell Saradomin Strike. It is advised to wear dragonhide armour and use the Protect from Melee prayer when fighting Saradomin wizards. Zamorak wizards use only the spell Flames of Zamorak. It is advised to use the Protect from Magic prayer when fighting the Zamorak wizard in the Wilderness, and to look out for player-killers, as other players can interrupt your fight.

On elite Treasure Trails, digging on the correct spot will cause either a level 97 Armadylian guard or a level 125 Bandosian guard to appear, which must be defeated before the next clue scroll or the treasure casket may be dug up. Armadylian guards must be killed with either Ranged or Magic attacks, since they are in the form of an Aviansie. It is advised to use the Protect from Missiles prayer when fighting them, and Protect from Melee when fighting Bandosian guards.

On master Treasure Trails, digging in the correct spot will cause either three Ancient Wizards (levels 112, 98, 98) in multi-combat to appear, or a level 140 Brassican Mage, which need to be defeated before the next clue scroll or the treasure casket may be dug up. If the coordinates are located in a multi-combat area, three Ancient wizards, each attacking with a unique attack style, will appear. Melee wizards are poisonous, with poison dealing 8 damage to a player. In single-combat zones, a Brassican Mage will appear, and its attacks cannot be stopped by protection prayers.

Following is a list of all known coordinate clues and their corresponding locations. The list is organised into ascending numerical value (for example, 00:00 north first, then 00:05 south, then 00:13 north, continuing accordingly). Shorthand writing is used together with normal writing. An example: 09.34N, 25.12E = 09 degrees and 34 minutes north, 25 degrees and 12 minutes east.

Remember: You must have a spade with you to dig up coordinate clues.

Note that some of the clues may require skill or quest requirements before you will be able to get to that location.' These quests, which must be finished or partially completed, include: Bone Voyage, Regicide, Legends' Quest, Nature Spirit, The Grand Tree, Fairytale II - Cure a Queen, Troll Stronghold, Cabin Fever, The Fremennik Trials, and Watchtower. Some coordinates will also require a certain skill levels to complete the clue, though the required level is low.

Cryptic clues are common riddle clues that can be found in all tiers of Treasure Trails. These clues demand a fairly wide variety of tasks. The tasks range from speaking to an NPC, searching a designated crate, or directing the player to dig in some fairly obscure location. For higher difficulty Treasure Trails, players may have to complete additional side tasks in order to complete the clue. These side task challenges may include finding a key or completing a puzzle box.

When doing medium Treasure Trails, clues will occasionally lead to a locked chest or drawer, which requires a key to open. Attempting to open the chest or drawer will provide a clue to which specific, usually local, monster to kill. Monsters that drop treasure trail keys drop them only when the player is in possession of that clue. It is worth noting that for clue steps involving keys, it is possible to obtain the key before reading the hint, which could save the player some time.

During hard clue scrolls, players may get shown a fairy ring code followed by some numbers. To solve these, the player must travel to the corresponding fairy ring and then take the number of steps shown by the numbers, in order of the compass direction (North, East, South, West), and then dig at that spot.

During hard or master clues, players may receive a puzzle box challenge from an NPC. Players must unscramble the image in order to receive the next clue or the reward.

During master clues, players are given three cryptic clues in one step. Players must go to the destination each cryptic provides and dig at the correct spot, or talk to the correct NPC, to obtain a torn part of the next step. When all three are obtained, they can be combined into either a new clue step, or the reward casket.

Emote clues involve equipping certain items in a particular location and performing an emote. These types of clues are featured in all levels of Treasure Trails. Once the emote has been performed, Uri will appear and give the player the next clue (or the reward, if the emote clue was the final step of the Treasure Trail). If the player has been requested to do another emote before talking to Uri, and they forgot to do it, he will say, I don't believe we have any business... but will not leave. The player can still perform the second emote and then talk to Uri to finish the clue. Easy clues require performing one emote, medium clues require performing two, and hard and above clues require performing one emote, then fighting an enemy such as the Double Agent. Elite clues do not involve fighting the Double Agent.

For players who do Treasure Trails frequently, it is not recommended to keep items for all emote clues banked, as hundreds of different items are used across the Treasure Trail levels and can take up bank space. Players with the appropriate construction level can build STASH units to store emote clue items near where the emote clue is located, saving bank space.

Map clues are an image of a location the player needs to search to advance along their trail. Maps are found across all clue scroll difficulties. They are rough pictures of a very local area. If the map leads to an X, the player needs to take a spade to the place indicated on the map with the X and dig there. If the map leads to a crate, it must simply be searched. Sometimes, players may find a small pile of crates, or a multitude of them. Search all of them until the next clue or the reward is found. Maps can include landmarks such as buildings, fish to indicate fishing spots, roads, rivers, bridges, and so on.

Digging in the location pointed to by a map clue will never spawn any monsters.

Maps are sorted by boxes and then by X, and then from left to right based on the location of the mark.

Hot Cold clues are clues in which a strange device will tell the player in the chatbox whether the player is Hot (close to) or Cold (far away from) the intended location to dig. This is based on an older children's game.

To find your location, click on the strange device and it will tell you how close you are to the treasure. (if solving a master clue, you will also take some damage). Its temperature is based on the distance of the treasure from the player, measured in the number of steps it would take to reach the treasure, ignoring any obstacles (this is the Chebyshev distance between the player and treasure). Then, teleport or walk to another location, and check to see if the strange device has gotten warmer. Repeat to pinpoint a location. You can also use the list or map to help you find your location.

If solving a master clue, when you dig at the dig spot, you will be attacked by a Brassican Mage in a single-combat area, or three Ancient Wizards if your clue leads you to a multi-combat area. In the fight against the Brassican Mage, his attacks are not affected by protection prayers; however, ranged armour seems to help. The three Ancient Wizards are a lot stronger and will use all three combat styles alongside poisoning you (poison cannot be blocked by protection prayers) 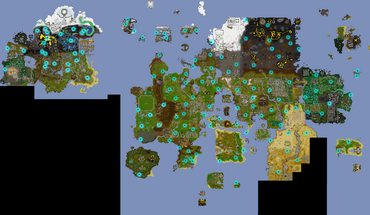