Tree Gnome Village is the first quest in the Gnome quest series and focuses on the war between General Khazard's army and the Tree Gnomes. During the quest, you need to aid the gnomes by retrieving stolen orbs.

{"requirements":"* The ability to defeat a level 112 [[Khazard warlord]]","desc":"The tree gnomes are in trouble. General Khazard's forces are hunting them to extinction.\n\nFind your way through the hedge maze to the gnomes secret treetop village.\n\nThen help the gnomes fight Khazard and retrieve the orbs of protection.","difficulty":"Intermediate","kills":"* [[Khazard warlord]] ''(level 112)'' (can be safespotted)","name":"Tree Gnome Village","start":"Centre of the [[Tree Gnome Village (location)|Tree Gnome Village]] [[Gnome Maze|Maze]], talk to [[King Bolren]].","length":"Short","items":"* 6 normal [[logs]] (or an [[axe]], obtainable during the quest though it is easier to bring one)\n* Combat equipment"}

The path to the Tree Gnome Village.

Talk to King Bolren in the centre of the Tree Gnome Maze. He will say that three orbs have been stolen by Khazard troops. Agree to help him, and you will be taken out of the maze.

Head north to the southern edge of the Battlefield and speak with Commander Montai, who is wearing red clothing. He will ask for you to get 6 logs to repair their defences. Supply him with the logs (if you didn't have logs or an axe simply return to a bank, or alternatively, you can kill the goblins in the maze for one. However, this will likely take longer than going to the bank). Talk to Commander Montai again, and he'll tell you that three trackers that have been sent out to retrieve coordinates to fire the ballista have not returned. He asks you to find them. 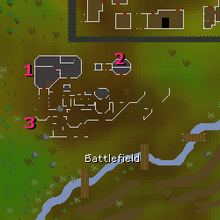 The first two trackers will give you the coordinates you need, which you'll automatically commit to memory. The third tracker, however, has been driven mad as a result of the chaos. Though most of what he says is garbage, he will give you a hint as to the number you need. You may have to do a bit of guesswork, though. For instance, "Less than my hands" would equal 1, where "More than my head less than my fingers" could be 2, "More than we but less than our feet" is 3, and lastly, "My legs and your legs" is 4. (It should not be any other possible number so try and remember what the third tracker said.)

Head back to the ballista (not the catapult, which is next to Montai), which is located in the south-west corner of the battlefield, and you'll be given a chance to enter the third coordinate. It will be a number between 1 and 4. If you miss, just try again until you get it. 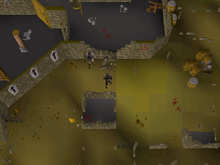 The crumbled wall you can climb over.

Once you get a hit, talk to Commander Montai once again then walk north to the stronghold (building where Gnome Tracker 1 was) and climb over the crumbled wall. When you do, you will be attacked by a level 48 Khazard commander; they have low Hitpoints (22) and should not be troublesome for most mid-levelled players (can be safespotted behind northern broken chair). You can skip defeating the commander if you wish and proceed through the door into the other room.

Note: There is a stall after climbing the crumbled wall where you are attacked without being able to heal; as a low-levelled player, this may be dangerous.

Go to the western room and climb up the ladder, retrieve the missing orb of protection from the chest inside. The commander in the room will attack you once you get close enough to him, but you can just run back down the ladder and out of the nearby door.

Return to the Tree Gnome Village, and talk to Elkoy to be sent to the centre. Talk to King Bolren, and he will then tell you that the other two orbs of protection have been stolen by the Khazard Warlord.

Note: If you fight the warlord before talking to the King again, you will have to fight him again as the orbs won't drop the first time.

The location of the Khazard warlord.

Exit the village and start heading north-west, past the level 64 wolves to the south-west edge of West Ardougne, just below the Underground Pass. Talk to the level 112 Khazard warlord and he will challenge you to a fight and attack. Kill him to retrieve the other two orbs. Although he has a rather large health pool of 170 HP, he does not hit often if you are wearing decent armour. Players with Rune armour and at least a rune scimitar should have little trouble fighting him if they have a small amount of decent quality food (lobster or better). Magic or ranged can also be used easily by continuing to move outside the range he can walk to, or by setting up a safespot. 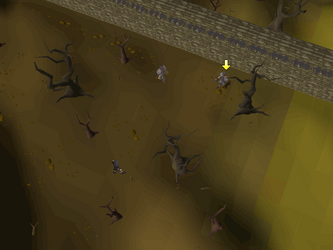 The warlord is also prone to flinching. By attacking him and walking west outside of his wander radius, he will stop attacking you once you have reached far enough west. If you use a Ranged or Magic attack here, the warlord will start running back east. If you run towards him and start attacking him again inside his wander radius, he will come back to you. Run west again before he is able to reach you, and repeat the process. Do not take too long killing the warlord, or he will despawn and you will be forced to restart the fight. He does not despawn when flinching around a tree.

To safespot the warlord, start the fight and head west until the warlord de-aggros near the larger dead tree. Move a little south and attack the warlord with Ranged or Magic while outside his aggro range. This will force the warlord to walk backwards at an angle and get caught against the West Ardougne wall and the northern large dead tree. If done correctly, players can attack the warlord safely as long as they keep distant enough as to not aggro the warlord again.

After killing him, pick up the orbs of protection. Go back to King Bolren and hand over the orbs to him. A cutscene ensues, where the gnomes are seen celebrating and holding a ceremony in which the orbs are returned to their places on the sacred spirit tree.

King Bolren returns the orbs to the spirit tree. 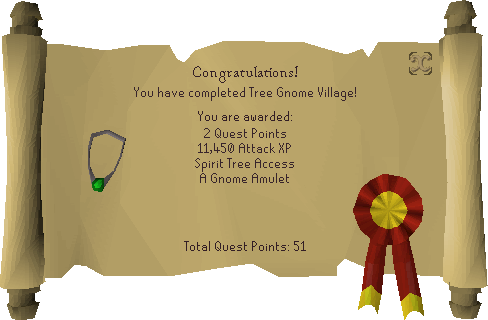 Completion of Tree Gnome Village is required for the following: