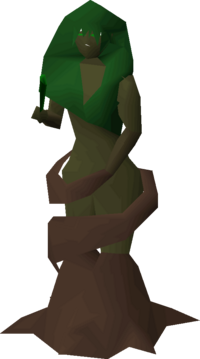 Tree spirits are monsters which can be found in the Enchanted Valley using the fairy ring code bkq when attempting to cut down a tree. Because of the common nature rune drops supplemented by drops of rune and adamant axes and various seeds, tree spirits can be good money, although not much experience will be gained. The tree spirit's combat level varies depending on that of the player's, a minimum of 14, and up to a maximum of level 159.

Unlike the tree spirit fought in the Lost City quest, these tree spirits are not undead; therefore they are not affected by Crumble Undead or the effects of the salve amulet and its variants. Magic is effective against Tree spirits due to their low Magic level that does not increase as their combat level and other stats do. They can also be easily safespotted by using plants close to the trees cut to spawn them.

Tree spirits are notable for being a fairly easy method for Ironmen obtaining a rune axe, as well as being an efficient method of obtaining Nature Runes for low-to-mid level players as the spirits drop 5.578 nature runes on average per kill.

As with all other aggressive random events, it was removed in an update.

Drop rates estimated based on 2,040,192 kills from the Drop Rate Project, unless otherwise cited.

There is a 14/128 chance of rolling the rare seed drop table.