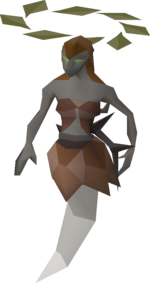 The Dramen Tree Spirit only appears in Entrana Dungeon when doing the Lost City quest. Players have to fight it with limited armour and weapons, as it only appears on Entrana.

It can be fought in the Nightmare Zone after the quest is complete. It is also considered a ghost for the purposes of a Slayer task.

The Dramen Tree Spirit drops nothing, but allows the player to cut dramen branches from the Dramen tree when defeated, which players can use to finish the Lost City, or make cinnamon for the Sir Amik Varze subquest in Recipe for Disaster. 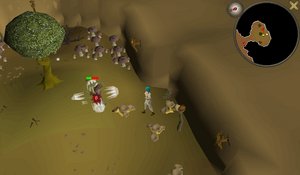 A safespot that can be used against the Dramen Tree Spirit.

It can be ranged or maged safely in a safespot using materials allowed on Entrana. Also it is not advised to use the bronze axe dropped from the zombies to kill it as the axe is weak and the tree spirit has high defence. It's easy to range the Dramen Tree spirit, or use magic, with it being weak to Crumble Undead. Arrows, unstrung bows and bow strings are allowed on the island. Simply string the bow when you reach the dungeon. For those who prefer not to use ranged or magic attacks, the Ring of recoil is an option. However if you take too long, the spirit will despawn and you will have to refight it [clarification needed].