Treus Dayth is the boss monster in the Haunted Mine quest. He has the power to possess objects around him and send them hurtling towards players. He is summoned when the player attempts to pick up the Innocent-looking Key.

He uses these three main attacks:

He can be fought in the Nightmare Zone after the quest is complete, although in there, he will not have any obstacles to command and is therefore very easy to kill, especially with Ranged. Killing Treus Dayth will not award Slayer experience in Nightmare Zone.

Lord Drakan had the Abandoned Mine destroyed after the holy River Salve started to seep into the lower shaft of the mine. Although most of the water was tainted by the land's twisted soil, some remained pure and retained Saradomin's blessing. Purple crystals were growing in the mine and absorbed the blessing. When exposed to the unholy creatures of the land, the crystals would severely weaken or even kill them. To prevent the crystals from falling into the hands of Saradominists, Drakan then imprisoned Treus Dayth, who was one of his followers, to guard the crystals on the lowest level. Even after Treus Dayth died, his tortured soul continued to serve as the mine's guardian. 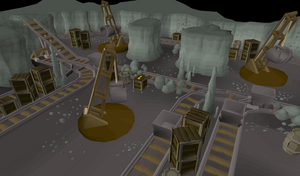 The crystal mine key appears suspiciously easy to take. 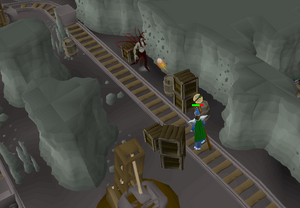 Treus Dayth has a nasty habit of teleporting in spots where the machinery can hit you. All that needs to be done is look where he is standing, and carefully walk around equipment to get to him. He can be difficult to fight for multiple reasons:

The player will take substantial damage constantly; if it's not the mine carts or the cranes, it's the pickaxes that will hit you anywhere you are in the room. Protect from Missiles helps since his attack style is Ranged-based, although this merely reduces damage, and his attacks are still quite damaging. Using super energy potions is also a good idea as the boss fight is extremely long because of how he moves around. Having to walk around whilst being hit by the mine carts and cranes is quite deadly, especially if the player is low-levelled. Note that the Crumble Undead spell is quite effective and viable. Because of all the obstacles in the room, using Magic or Ranged will often require that you stand next to him to be able to attack, so it is best you use your strongest attack style as each is essentially limited to Melee range.

For lower levels who have access to Crumble Undead, using this with Rune armour may be the easiest method. Since Treus Dayth has negative magic defence, players can still hit even when wearing armour like Rune. Having more defensive armour than something like Mystic can drastically reduce damage taken from the surroundings.