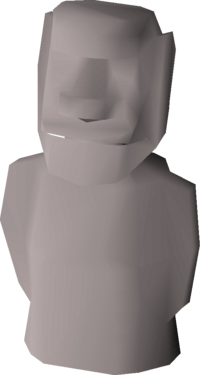 The Tribal Statue is an altar found in Tai Bwo Wannai dedicated to the Karamjan gods, usable only after talking to Tinsay after the completion of Tai Bwo Wannai Trio. During the quest, the player must find the insane priest Tinsay, who will only come home to Tai Bwo Wannai after the player gets him a number of odd food items. Once fed, Tinsay will return to the village to repair the tribal statue, and speaking to him after the quest will allow the player to pray at the statue to restore their prayer points.