Trident of the swamp 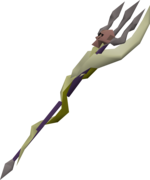 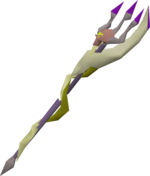 The staff has a built-in magic spell that can be used regardless of the spellbook the player is using, although it cannot be used to autocast any other combat spells. The spell gives no base experience and grants the player 2 Magic experience per damage dealt.

In addition, the trident possesses a passive effect in which successful hits with either the built-in attack or a manually-cast combat spell have a 25% chance of inflicting venom on the opponent. If the player is wearing a serpentine helm, the chance is increased to 100% if the target is a monster. If using a manually-cast spell, the staff must contain at least one charge for it to be able to apply venom, although this will not use up any charges.

The trident of the swamp is a popular weapon choice to apply venom among combat pures who do not want to get 75 attack for the toxic staff of the dead.

The trident of the swamp has the same effect in drift net fishing as the Merfolk trident, though it does not have the ability to hold Pufferfish charges (convenient for breathing underwater).

In order to use the trident's magic spell, it must be charged with various runes, holding up to 2,500 charges when fully charged. One charge is consumed each time you cast the built-in spell. Charging the trident requires level 78 Magic, and the following items are required for a single charge:

Any remaining charges within the trident can be removed at any time to recover the runes and Zulrah's scales.

If lost on death, any scales that were used to charge the trident will appear on the floor along with the uncharged trident.

Players can give an uncharged toxic trident and 10 kraken tentacles to Lieve McCracken to create an enhanced trident of the swamp, which holds 20,000 charges instead of 2,500.

The maximum hit dealt by the trident is dependent on the player's current Magic level, starting at 24 with level 78 Magic and increasing by one every three Magic levels, up to a maximum of 39 at level 123 (obtainable only through smelling salts in Tombs of Amascut). Both magic damage bonuses and stat boosts will modify the max hit of the spell; likewise, stat-reductions will lower the damage. The trident always has a max hit of at least 4, even when reduced to 0 magic. Compared to the other two powered staves, the Trident of the seas has a lower base maximum hit by 3 (max of 20 at level 75), and the Sanguinesti staff increases the base maximum hit by 1 (max of 26 at level 82).

When on a Slayer task and using the Slayer helmet (i), the maximum hit is increased by a further 15%. This bonus stacks multiplicatively on top of the other magic bonuses above, but it does not stack with a Salve amulet(ei).

The following text is transcluded from Transcript:Trident of the swamp.
When dismantling the uncharged version