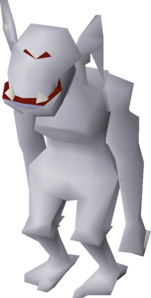 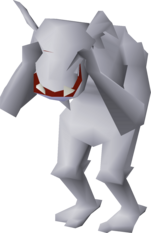 The troll child is a young troll found at the entrance of the Ice Path. The player has to free his parents from Kamil, who froze them for supposedly stealing his ice diamond, during the Desert Treasure quest. At the beginning of the quest, he is crying too hard to be talked to, so the player will need to give the child "sweet food" such as a cake, a chocolate cake or a chocolate bar in order to talk with him and thaw the frozen ice gate nearby. He actually holds onto the diamond, but claims that his mother and father have it in order to convince the player to free him. His father remarks that he inherited "dad's smarts." After being reunited with his parents, he gives the diamond to the player and is treated to his favourite meal, raw mackerel, by his mother.