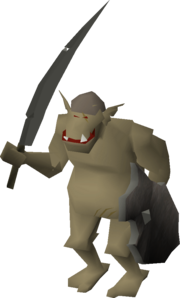 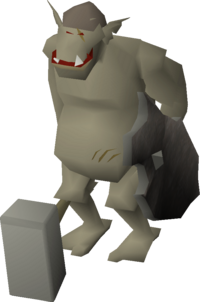 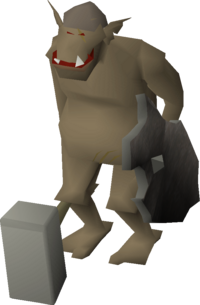 Troll generals are huge and powerful Giant trolls that live in the Troll Stronghold, on the top floor.

Troll generals can be very advantageous to kill as a higher-level choice when assigned Trolls, as they have a reasonably high drop rate of law and nature runes, including high alch drops such as steel platebodies, adamant axes, rune warhammers and granite shields.

Troll generals have somewhat low accuracy on their attacks. However, high-tier melee armour (such as Barrows) is still recommended if not using prayer, as they can hit extremely hard (up to 38). Their attack speed of 4 (same speed as an Abyssal whip or a scimitar) can also prove deadly if they hit twice or thrice in a row. Therefore, use of the Protect from Melee prayer is strongly recommended if you're not using high-tier melee armour.

It is possible to use halberds, ranged or magic attacks on the generals safely, as their large size allows them to be corner safespotted. Extreme caution is advised at all times, as they can leave their respective rooms, although this is a rare occurrence, and they only attack if the player walks right next to them. It is possible to poison them, run out of their range, and let the poison do most of the work.

The troll general in the far north-west room can be safespotted by standing in the corridor between his bed and the wall. He cannot enter that corridor and can be ranged or maged.